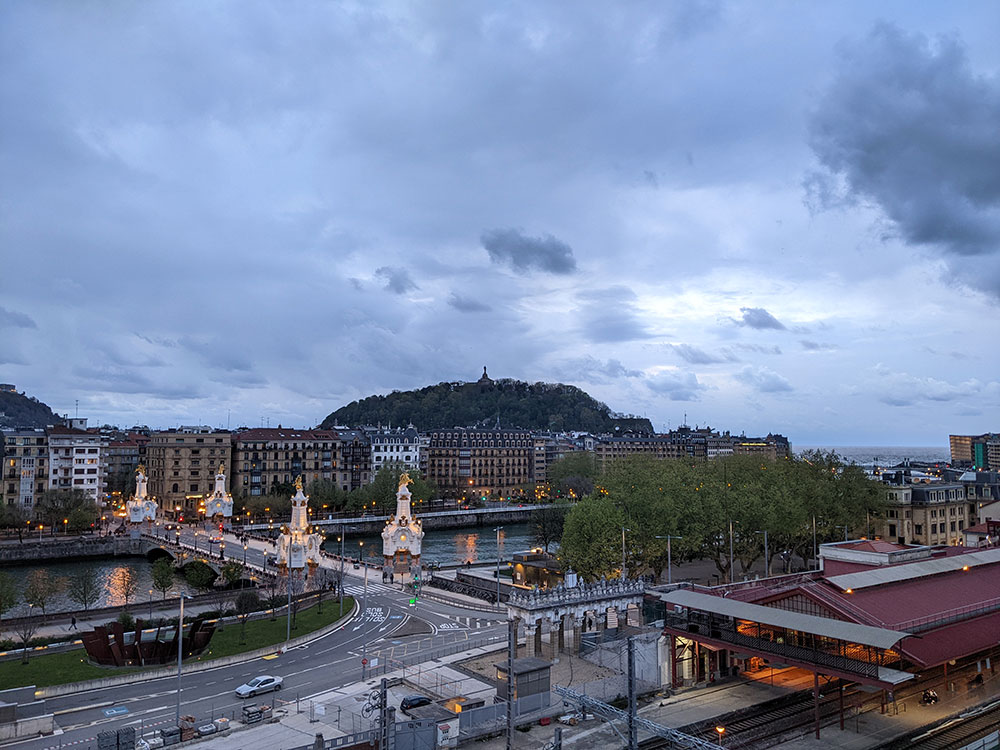 Whilst San Sebastian is a fairly compact city (you can get around on foot to most places), it’s still worth doing a bit of research on the best area to stay in depending on what you’re after.

There are a number of neighbourhoods in the city, and they all offer something a little different.

To help you figure this out, we’ve pulled together this guide on the best places to stay in San Sebastian. Whether you’re looking for a relaxing weekend, or to be at the centre of the party, we’ve got you covered!

But first, it’s worth running through a few things about accommodation in the Basque city.

A few things about where to stay in San Sebastian

Before we get into the different areas in the city, there are a few things that are worth taking note of – regardless of where you end up staying!

1. Getting around San Sebastian

Donostia is a compact city. Most of the top things to see are all within easy reach on foot.

It’ll only take you 40 minutes or so to make your way from the far west of the city (at Ondarreta beach) to the far east of the city (the end of La Zurriola beach). And most of the city’s attractions fall within that range.

If you plan your time in the city, you’ll never have to walk too far from one place to the next. Plus, San Sebastain has plenty of cafes or pintxo bars to stop for a quick pit stop!

The city also has great connections across the city by bidegorri (bicycle lanes). The central area is fairly flat so you can nip around the city fairly comfortably and safely. There are plenty of bike rental places too.

That means when it comes to choosing where to stay, you don’t have to choose the area closest to the places that you want to visit – as you’re never too far away!

2. Dive into, or avoid the nightlife

Now if you’re going to be going out late into the evenings, you probably don’t need to worry too much about the noise. If you’re not, you might want to consider a few things.

Whilst San Sebastian isn’t a party town, particularly during the summer months there’s enough going on to keep you awake in certain districts during the night.

The city has a huge social and cultural calendar, so it’s worth checking out what’s going on (and where).

If you want an early night’s sleep, then you probably want to play it safe and avoid the Parte Vieja (Old Town). Places like La Zurriola Beach and Sagües occasionally have open air concerts in the summer months too.

Generally speaking, the centre (Area Romantica) and Antiguo districts will be fairly quiet in the evenings. However, if you’re here on the 20th January, expect to hear the banging of drums from La Tamborrada wherever you are!

One of the first things to know about San Sebastian before visiting, is that the Basque city isn’t the cheapest place.

During peak season, prices for rooms can shoot up quite quickly. And certain times of the year (like Semana Grande and Easter) see particularly high demand and higher prices.

That’s why it’s first worth considering what time of the year you want to come and visit. If price is an influential factor for you, it’s probably best to avoid the peak season and visit on the fringes.

That being said, there are all types of accommodation on offer and it is possible to do San Sebastian on a budget.

One word of advice (whatever your budget) would be to book in advance to avoid any disappointment.

Where to stay – the best areas in San Sebastian

Now you know a little bit about the things to look out for, let’s dive into the best areas to stay in Donostia.

The Area Romantica is the modern centre of San Sebastian. It covers the shopping district and La Concha Bay – San Sebastian’s star attraction!

As the “centro” name suggests, it’s located in the heart of the city.

The Parte Vieja is just a short walk away, with Gros and Antiguo just a little bit further to either side. The top things to do are all within easy reach, making it a great place for a base to explore all the city has to offer.

On your doorstep are also some of the most iconic buildings in San Sebastian. The Buen Pastor Cathedral, the City Hall and the Local Government Building in Plaza Guipuzcoa are all located in the Area Romantica.

Wandering down most streets in the barrio (district), it’s hard not to fall in love with the stunning Belle Époque architecture.

2. Parte Vieja (Old Town) – Best for those looking to explore the city by night

There’s lots going on in the Old Town of San Sebastain which makes this the perfect place for those looking to explore the city day and night.

The district is at the centre of San Sebastian’s famous foodie culture. Its narrow streets are packed full of pintxo bars which makes the Old Town one of the ​​liveliest corners of the city.

That’s because the pintxo culture revolves around moving around.

The best way to experience it is go into one bar, grab a drink and a pintxo or two and then move on to the next bar. The result is plenty of people eating, drinking and having a good time in the streets.

If you’re after quiet evenings in the hotel, then it’s probably best to avoid the Old Town, particularly if you’re here over the weekend.

Alongside the popular food traditions, the area has a deep rooted history as one of the oldest barrios (areas) in San Sebastian. The Plaza de la Constitución, Basilica of Santa María and Monte Urgull are all must-visit sites.

It’s what makes the Parte Vieja one of Donsotia’s most visited attractions.

3. Gros – best for a chilled out surfing vibe

Gros is located at the far east of the city, between the River Urumea and Monte Ulía.

It’s become known as the cool, hipster district of San Sebastian thanks to the Zurriola Beach.

The waves here are the best for surfing and hundreds of surfers flock from all over the world to spend the summer months in the Gros district of San Sebastain.

Naturally all the young, cool surfers want to be as close to the action as possible. And with them, they have brought a chilled-out, alternative vibe to Gros.

At night, the area does come alive, with plenty of bars and terraces to enjoy a late evening drink. However the wider streets and more dispersed nature of the bars means that you won’t be kept up at night if you choose to stay here.

4. Antiguo – the best area to stay for families or for a more local vibe

Antiguo (which means old in Spanish) is actually the oldest district in San Sebastian. The area is located to the far west of the city, at the foot of Monte Igueldo.

It originally emerged as a farming village outside of the city walls tens of centuries ago. But as San Sebastian has grown it has extended to bring Antiguo as part of the city.

Today, the neighbourhood is a popular spot for local Donostiarras to live. With that, it brings  a different character and pace of life to the area compared to the rest of San Sebastian.

The vibe here is a little more chilled out with a slower pace, making it the perfect place for families or those looking for a more relaxing city break.

It’s a little further out from some of the main areas such as the Old Town but walkable along the beautiful Paseo de La Concha in 20-25 minutes or so.

But the beauty of Antiguo is you needn’t travel too far. The district has its own beach, mountain, theme park and some of San Sebastian’s must visit attractions!

5. Egia – best for those on a budget or looking for a local vibe

Located to the south of Gros, Egia is one of the up and coming areas of San Sebastian.

It’s a little further out from the centre of the city and main points of interest, which makes the prices per night here a little cheaper. But the beauty is, you’re still only 10 minutes from Gros and 20 minutes from La Zurriola beach.

Over recent years the area has experienced some investment and as the city extends, parts of Egia are becoming ever more central.

The reopening of Tabakalera (an old tobacco factory) as an International Contemporary Culture Centre in 2015 has given new life to the district. Combined with the Cristina Enea Park, there’s good reason to visit this part of San Sebastian.

Egia is also becoming a young artistic hub. A concert at the hidden Dabadaba club is one of the best nights out you can find in the city!

So there you have it. Hopefully this guide helps in deciding where to stay on a visit to San Sebastian.

Whilst there are pros and cons for all the different areas, it’s worth bearing in mind that you can make your way around the city pretty easily on foot.

Below is a summary of the areas we’d recommend for the different types of travellers.