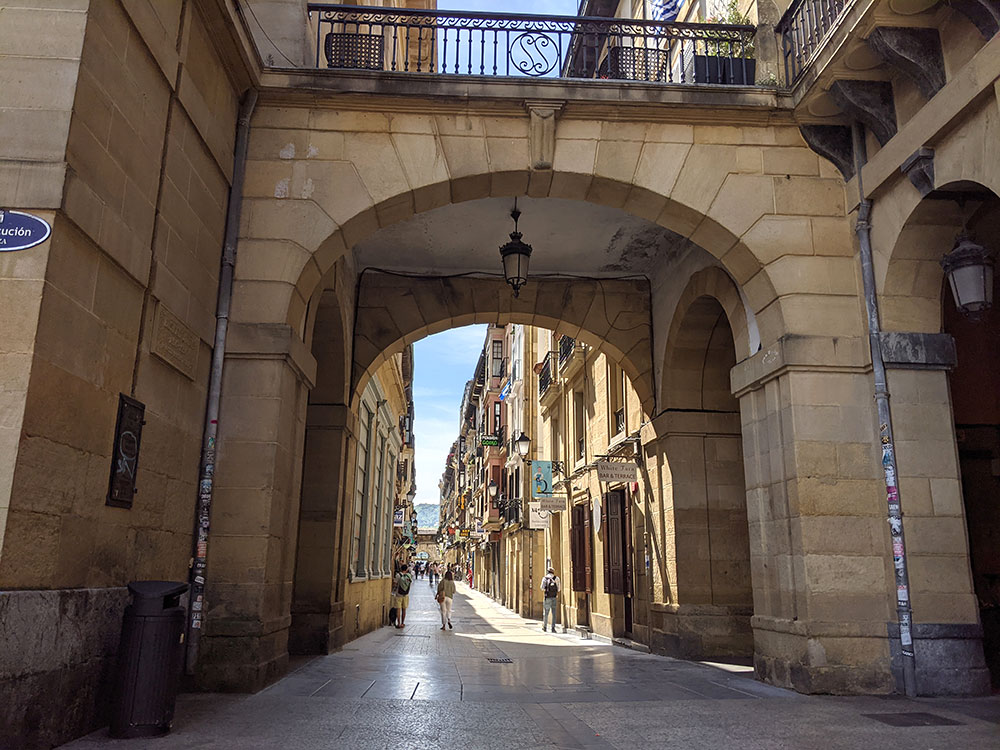 The Parte Vieja or Old Town of San Sebastian is one of the most liveliest corners of the city.

Sandwiched between the River Urumea, La Concha Beach and Monte Urgull, the neighbourhood is probably Donostia’s most visited attraction.

And there’s a good reason why.

Famous for its pinxo cuisine and vibrant nightlife, the Parte Vieja’s narrow streets are crammed full of bars which give the area a unique atmosphere.

Dating back to the 12th century, it’s the second oldest part of the city behind Antiguo. However, the current Old Town has been built up over the past 200 years after the walls of San Sebastian were pulled down and the city was practically burnt to the ground in battles during the 19th century.

Things to see in the Old Town

It’s not all food and drink in the Parte Vieja.

Albeit getting lost in the streets of the Old Town is something that should be on everyone’s agenda, there are a few things that you should make the effort to visit.

Making your way around the Old Town is really easy as it’s 100% pedestrianised.

Plaza de la constitución is the heart of the Old Town. Built in 1817, it played a key role in the rebuilding of San Sebastian after its destruction.

The main building in the square used to be the town hall until this moved to the current location (in the 1940s) on La Concha bay.

But the square still plays an important role for Donostiarras.

It’s the centre of all the main festivals in the city. Where the flag is raised and the first drum hit in La Tamborrada. To the centre of Saint Thomas day, where the txistorra stalls are set up.

One of the first things you’ll notice as you enter the square is the colourful facade of the houses, alongside the numbers above each of the windows.

These date back to when the square housed Donostia’s bullfights. Each of the houses were one of the balconies from where you could get a view over the bullring.

Today, there’s no bullfighting here. And even when the festivals aren’t on, the square is still a lively spot with the numerous bars that occupy it. Most of them have terraces making it a good place for when the sun is out.

Constructed in the first half of the 16th century, the San Vicente church is the oldest in the city.

The church has a beautiful gothic style exterior with impressive stained-glass windows. On one of the facades is the Pietà (Pity) sculpture, a piece of work by Oteiza.

The San Vicente Church is located at the start of the calle 31 Agosto.

The street is famous as being one of the only corners of the city that was not completely destroyed in the fires in the 19th century. The street is named after the date of the fire – 31st August street.

Whilst you wander along the street, it may appear like any other in the Old Town. But pay special attention to the architecture and you can spot the original houses and facades that are still standing.

For food lovers, calle 31 Agosto has some of the more famous pintxo bars. Including La Viña which is known for having the best cheesecake in San Sebastian.

Suddenly you’ll turn a corner in the Old Town and in between the buildings you’ll get a glimpse of the striking Basilica of Santa María.

The unique Baroque facade, which is a mixture of Gothic Churrigueresque and Neoclassical architecture is an impressive contrast to the rest of the buildings and the Monte Urgull backdrop.

The entrance actually runs perfectly in line with the entrance to the Buen Pastor Cathedral. So standing on Calle Mayor you’ll have the perfect view of two of the most stunning buildings in Donostia.

Zuloaga Square isn’t just the best place to start your climb up Monte Urgull. It’s also the home of the San Telmo Museum.

The museum is set in the corner of the square in a 16th century convent that was once used as a military barracks. The building has been beautifully designed (and extended) to blend with the old convent and feels like it almost forms part of Monte Urgull.

The building alone is well worth a visit and it still contains the cloister and ancient church.

Today the museum houses the Museum of Basque Society and Citizenship. It’s the oldest museum in the Basque country having been inaugurated in 1902. It contains a fine art collection alongside an ethnographic collection preserving the memory of Basque society.

Pintxos in the Old Town

Arguably the reason why most people come to the Parte Vieja is for the pintxos.

The Old Town is still home to some of the best pintxo bars in San Sebastian where you can get a true taste for the local cuisine.

It’s a foodies paradise! And the best way to delight your taste buds is to go from bar to bar trying the different options on offer.

We run through some of the most famous places / pintxos in this post (that are also listed below).

But don’t get too caught up in finding individual places, the beauty of going for pintxos is you spend a short amount of time in each place, experiencing everything on offer.

Shopping in the Old Town

In and amongst all the pintxo bars, restaurants and bakeries in the Old Town are some of San Sebastian’s best shops.

Even Kate Middleton has been known to be a fan of the shops in the Old Town. She occasionally buys clothes for her children in San Sebastian and Princess Charlotte was dressed in garments from Irulea in her first public appearance.

If the shops are fit for royalty, then you’re bound to be able to find something for yourself!

In contrast to the centre of San Sebastian, the shops in the Parte Vieja are mainly boutiques or independent shops. So you know when you’re buying from them, you’re also supporting local businesses.

Places such as Hawaii, SEBÂSTIAN Store, The Bohemian Shop and Pukas are some of our favourites.

There are also some food stores where you can pick up some goodies such as artisan chocolate from GARRARTE Dulces Artesanos or maybe some traditional Basque food from Zapore Jai.