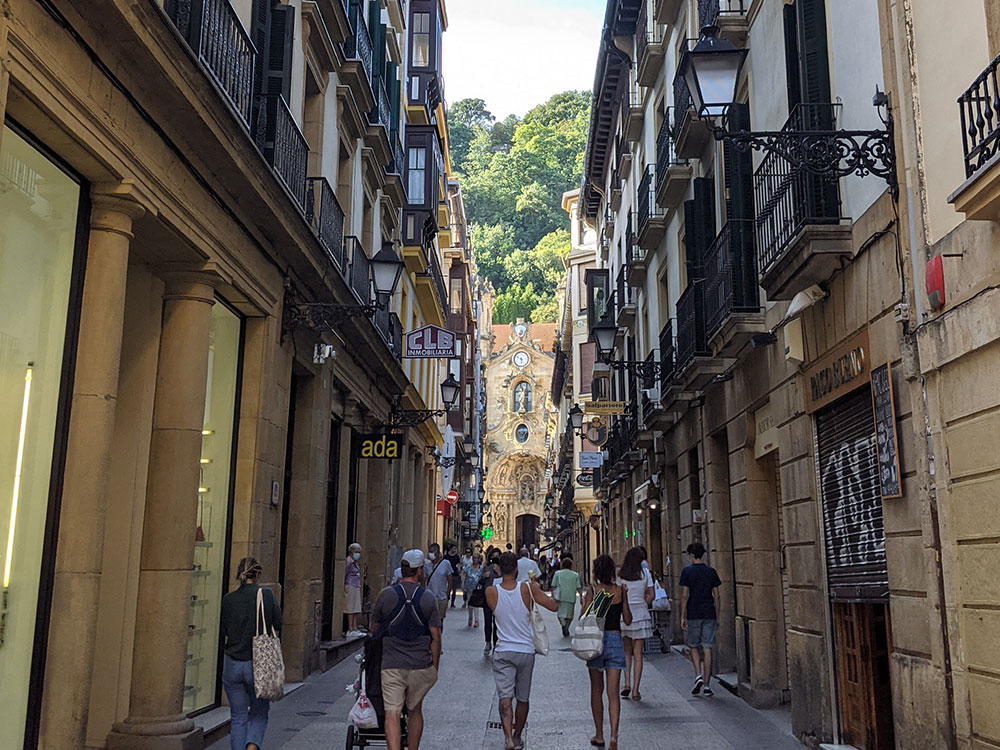 The Basílica de Santa María is one of the top things to see on a visit to the Parte Vieja (Old Town) of San Sebastian. And a trip to the Old Town is a must when visiting Donostia!

It’s one of the most prominent buildings. Mainly hidden as you lose yourself in the narrow streets of the Parte Vieja, you’ll suddenly turn a corner and be stunned by the beautiful facade.

But what’s so special about the Basílica de Santa María? In this guide we’ll explain.

The Basílica de Santa María is located on Calle 31 de Agosto where it meets Calle Mayor. The two streets form a mini square where the basilica is the prominent feature.

It’s easily reachable by walking from the centre of San Sebastian. Most of the Old Town is pedestrianised so there’s no parking.

Things to know about the Basílica de Santa María

Whilst standing from Calle Mayor to admire the building is a great plan. You’ll appreciate the building a little more once you know a few things about its place in Donostia.

The oldest church in the city

The Basílica de Santa María was constructed in 1750.

Technically speaking this means it isn’t the oldest church in San Sebastian as the San Vicente Church (just a stone’s throw away) was built in the first half of the 16th century.

However, the construction today was built on the remains of an old Roman church that occupied the same space. So it’s widely considered as the oldest in the city for that reason.

If you speak a little Spanish, you may have recognised that Calle 31 de Agosto means 31st August Street.

This street in the Old Town has a particular history. It’s named after the day a great fire took hold of San Sebastian whilst English and French troops were in conflict. As a result, the entire city pretty much burned to the ground in 1813.

The only street that survived the blaze was the Calle 31 de Agosto.

The best thing is there’s not a single obstacle in between the two buildings which are 1km apart.

So standing pretty much anywhere on Calle Mayor, you have a perfect view of two of the most stunning buildings in San Sebastian.

The unique Baroque facade is a mixture of Gothic, Churrigueresque and Neoclassical architecture with a stunning entrance.

It’s an impressive contrast to the rest of the buildings in the Old Town and the Monte Urgull backdrop.

If you study the facade close enough, you’ll see the tortured figure of Saint Sebastian (in front of the window) and the shield of Donostia on the top of the building.

Since 2014, the right hand side of the Basílica de Santa María has been “blessed” with the presence of the Harmony of sound (Armonía del sonido) sculpture.

I say blessed in inverted commas as the sculpture certainly divides options in Donostia. A contemporary piece of art, painted in a brilliant white, it’s a stark contrast to the older facade of the building. It’s more a harmony of old and new.

You could say the artist’s objectives were achieved. Maximilian Pelzmann the Irish creator of Harmony of sound wanted to 1) ask questions and not give answers and 2) provoke indifference.

Places to visit near the Basilica

Sitting at the heart of the Parte Vieja, there are plenty of other things to see nearby the basilica.

Famous for being the only street in San Sebastian to survive the fire in 1813.

It may look like just another narrow street in the Old Town, but pay attention to the finer detail and you’ll notice some of the original brickwork from centuries gone by.

At the other end of the Calle 31 de Agosto, you’ll find what is technically the oldest church in the city.

Built in the first half of the 16th century, the church has a beautiful gothic style exterior.

Heading out of the Old Town towards La Concha Beach, you’ll find the port of San Sebastian.

The port dates back to the 15th century. It’s a small triangular port split into a port for fishing and one for leisure. During the summer it’s a bustling corner of the city, with boats going in and out and tourists enjoying the many fish restaurants that line Paseo del Muelle.

The port sits in a pretty lucrative spot with a Monte Urgull backdrop and views of Santa Clara Island. Sitting on the wall to the side of the Real Club Náutico is one of my favourite pastimes on a nice day.