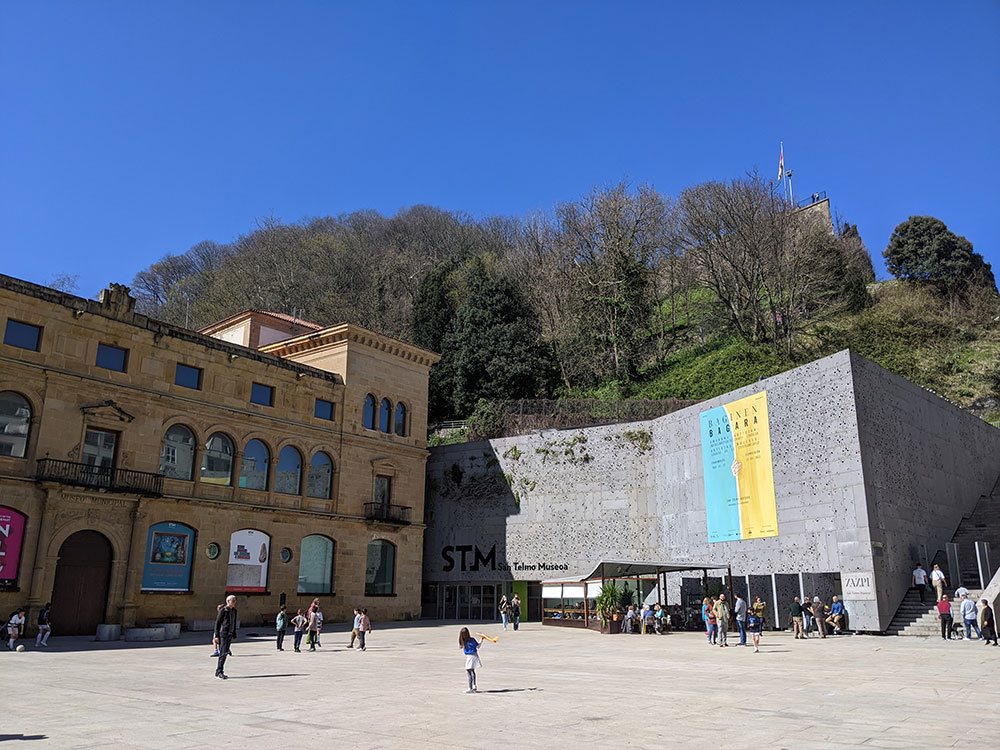 Hidden in the corner of Zuloaga Square in the Old Town of San Sebastian, you’ll find the San Telmo Museum.

A harmony of architecture and artistry, the aluminium facade blends in beautifully with Monte Urgull almost appearing as though the building is carved out of the mountain itself.

The perforated holes in the facade even allow vegetation to grow through the facade, giving it a worn stone look. It really is something special.

And whilst you can sit back and admire the outside of the museum, there’s so much more to see on the inside. In this guide you’ll discover what makes this museum so special.

Things to know about the San Telmo Museum

Step inside to understand more about Basque Culture. The impressive entrance is just the start of your journey of discovery.

It’s home is an old convent

It’s not the first time the old convent has been used for other purposes. In the 19th century, it was converted into a military barracks, used to support the Monte Urgull military fortress.

It wasn’t until 1932, a few years after the city council completed the purchase of San Telmo, that it was inaugurated as a museum.

The renovation work to connect the new museum entrance to the old building has been done seamlessly, maintaining the original characteristics of the convent.

When the building was restored, it also gave birth to one of the museum’s finest jewels – the Sert Canvases. These are paintings that cover the walls of the old church, illustrating some of the most important events that occurred in Basque history.

It’s the Museum of Basque Society and Citizenship

The Sert Canvases form part of the permanent exhibition at the San Telmo museum which revolves around the preservation of the memory of Basque society.

It tells the story through four exhibitions (I personally found sections 2 and 3 most interesting).

Alongside the permanent exhibition, the museum holds temporary exhibitions which you can check out on the museums website.

It’s the oldest museum in the Basque country

The San Telmo Museum opened in 1932, but its origins actually go back a little further.

The Museum of Basque Society and Citizenship was actually established in 1902, located on the corner between calle Andia and Garibai near Plaza Gipuzkoa. It quickly became too small and the museum moved to a new site shared with the Municipal Library, later moving to San Telmo.

The museum went under a big restoration from 2007-2011, reopening as the museum it is today.

How to visit the museum

It’s easy to get to the San Telmo Museum walking from pretty much anywhere in the city – after all San Sebastian isn’t that big!

However it is located in the pedestrianised Old Town, meaning there’s no parking available at the site. The nearest parkings are the Boulevard car park (Alameda del Boulevard 2, 20003) and Okendo parking (Reina Regente 1, 20003)

Things to do nearby the San Telmo Museum

Located in the Old Town, close to Gros and the River Urumea estuary, there’s a lot to see nearby the museum. Below are our top picks.

Just outside Plaza Zuloaga is the Vicente Church. A gothic style church built in the 16th century, it’s one of the oldest in San Sebastian (debated between San Vicente and the Santa Maria Basilica).

The facade is also home to a sculpture (Pietà) by Oteiza, one of the most famous sculptures in San Sebastian who’s work also features in the museum.

After discovering a little about the history of Basque society, you can work your way up Monte Urgull to discover some of the history of San Sebastian too.

Monte Urgull bears some of the scars from the many conflicts the city has witnessed over the years. The best way to hike to the top is from Plaza Zuloaga where the museum is located.

Behind the museum is Paseo Nuevo or the New Promenade as it translates to. It’s a coastal walk that loops around Monte Urgull finishing up at the aquarium and port of San Sebastian.

A natural headland the route is exposed to the full force of the Cantabrian Sea. One of my favourite pastimes is to watch the waves crashing against the rocks. It’s both beautiful and rather therapeutic.

Along the walk you’re also treated to spectacular views of the Cantabrian Sea and Santa Clara Island.