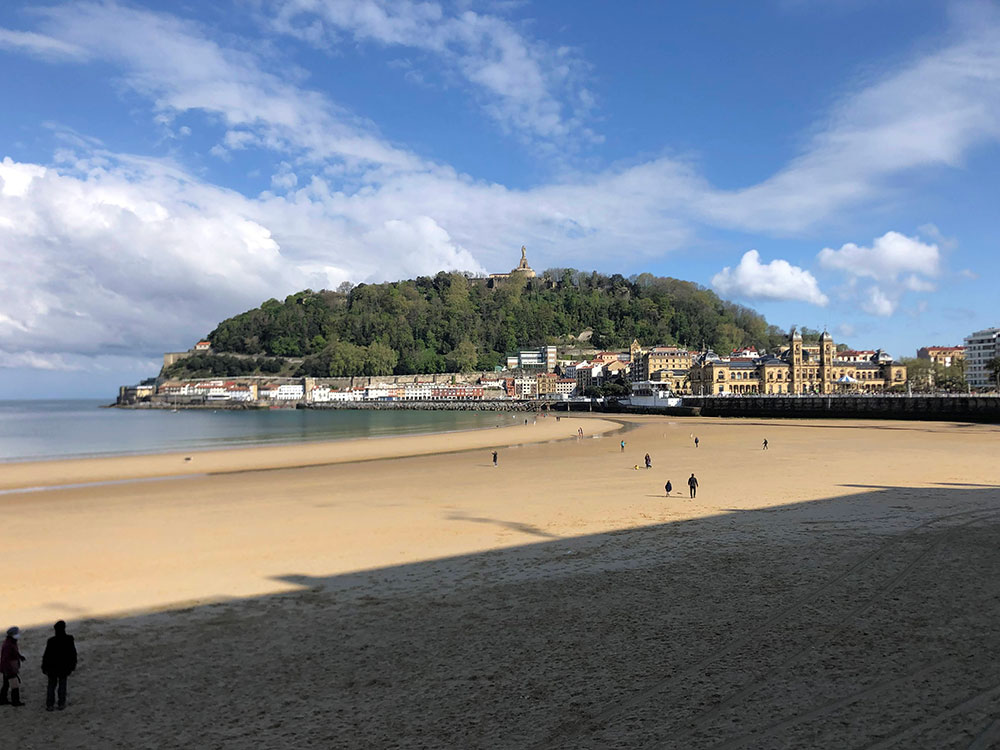 Situated in the heart of San Sebastian at the end of La Concha bay, Monte Urgull is one of the most significant landmarks in the city.

It stands as backdrop to the Old Town, but over the years has also been the centre to some of the most historical moments in San Sebastian’s past.

Today it plays the role of one of the most important green spaces in Donostia. A place of calm and tranquillity – far from the past it has witnessed.

As you can imagine standing from the centre of San Sebastain, Monte Urgull offers some of the best views over the city.

The mountain is scattered with viewpoints and look out spots which offer panoramic views over La Concha Bay and the centre of San Sebastian. Whilst to the north side, there are impressive views and a different perspective of Paseo Nuevo and the Cantabrian Sea.

It certainly makes it worthwhile to hike up and get a glimpse for yourself!

There are four different paths to climb Monte Urgull. All of them are readily accessible and fairly easy to climb – with a bit of will and lung power!

The path starting points are:

Whilst all of them offer great views, perhaps the most impressive is the path from the San Telmo Museum (​​Plaza Zuloaga).

This route not only provides stunning panoramas, but it also takes you through time and the history of San Sebastian. (We’ll go through exactly what you can see on this route a little further down).

It’ll take around 30-40 minutes to hike to the top depending on your speed. When you reach the top, it’s worth spending a bit of time, walking around and enjoying the views of the city from each side.

After all that walking, you’ll deserve a pit stop. The good thing is, at the peak of Monte Urgull is one of Donostia’s best secret spots – El Polvorin. A bar set in the San Sebastian skies.

It’s only open when the weather is good. A tell-tale sign that it’s open are the white umbrellas that you can just make out to the left of the Cristo de la Mota statue looking up from La Concha.

The bar has an open air terrace. It’s an epic place to take in the sun and enjoy the views of Santa Clara Island and La Concha bay.

From the early afternoon, there’s usually a good atmosphere up here too. If you get lucky, you may even find that there’s some live music on. If that is the case, you’ll probably not want to leave!

What is there to see on Monte Urgull?

Monte Urgull has a rich history. The unique location and terrain of Urgull naturally led to it becoming a military fortress in the 12th century.

The reminiscences of Monte Urgull’s military history are still present today, along with the scars from the number of attacks (mainly from the French) it was subjected to over the years.

If you have time on your hike to the top, stop by some of the sights and relive some of Monte Urgull’s past.

The Castillo de la Mota as San Sebastian’s first defence was witness to most of the sieges and battles that took place over the centuries.

The castle played a key role in defending the city and its walls from the 12th century, making it one of the most historically important buildings in Donostia.

It’s easy to see why the military stronghold was built here. From the castle, there are incredible views which stretch miles out at sea and in all directions. It would have made watching over the city a slightly easier job!

The lookout points remain today, so you can peek through and take a look at what the soldiers would have seen all those years ago. There are also several cannons that flank the castle to give you a better impression of how it would have been used in practice.

Today, Castillo de la Mota has thankfully retired as a military fortress. It was insead designated a National Artistic Historical Monument in the 20th century.

It’s the home to a small museum which tells the fascinating 800 year story of the site. Entry is free, so it’s well worth a visit.

Whilst at the top of Monte Urgull, you can also see the Sagrado Corazón (“Sacred Heart”) statue up close. Known as the Christ of the Mote (Cristo de la Mota), it has some resemblance to the Christ the Redeemer statue in Rio de Janeiro.

It’s not quite as tall. The Cristo de la Mota is 12 metres tall, whereas the Christ the Redeemer stands at 28m. But the statue sits on a base of the chapel which means the entire monument reaches over 24m in height.

It means it can be seen for miles out and has become a key landmark of the city of San Sebastian.

The English Cemetery or Cementerio de los Ingleses in Spanish is on the north side of Monte Urgull, near the Paseo Nuevo walkway entrance.

The origins of the cemetery are not entirely clear.

Some say that the bodies of the English soldiers that died in the First Carlist War lie here.

Others argue that it is in fact a mass grave where French soldiers are buried.

Whatever the case may be, some of the tombstones are still standing where you can discover something from the fearsome battles that took place in San Sebastian.

There’s also a mural that pays tribute to those who died in the battles. It makes for a fascinating place.

Whilst Monte Urgull is a public space, it’s also gated and closed at night.