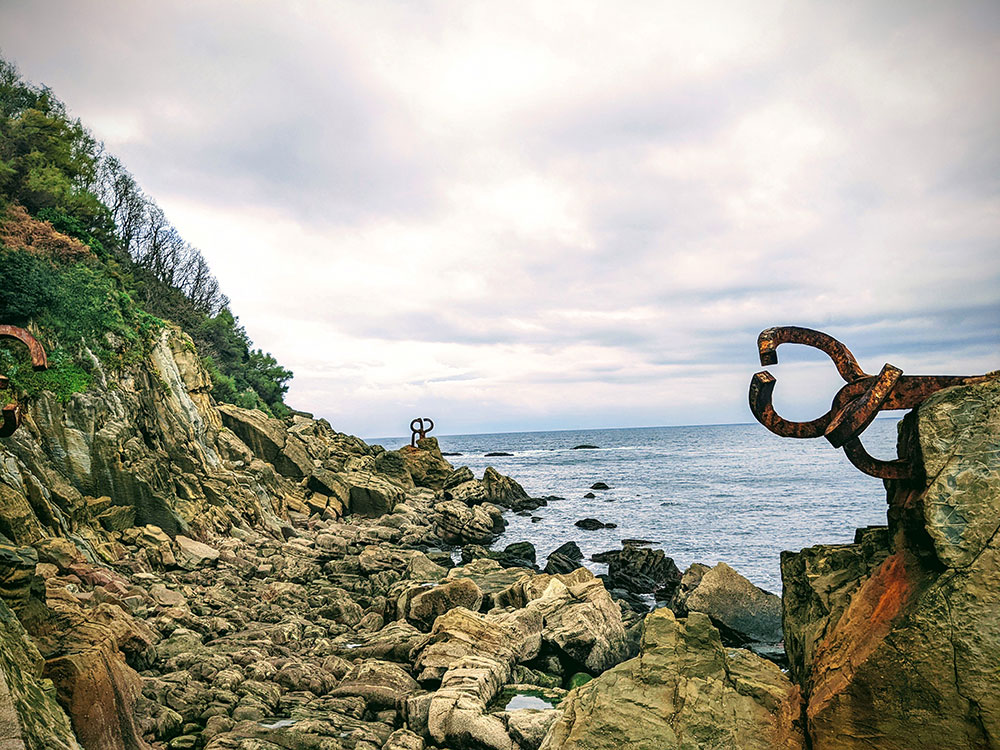 El Peine del Viento or “Comb of the wind” (how it translates into English) is a set of three sculptures positioned at the foot of Monte Igueldo at the end of Ondarreta beach in San Sebastian.

Installed in 1977, the large steel sculptures are one of the most popular spots to visit in the city.  The sculptures are anchored to the rocks where the sea meets the land making them “active” living sculptures with the sea and wind regularly crashing against them. And no matter how many times you visit the site, you’re likely to have a different experience each time with the landscape changing with the sea, sky and wind.

This is the case particularly when the sea is choppy, when El Peine del Viento really comes alive. Alongside the might of the sea crashing against the rocks, there are several blow holes which create a geyser style effect on the viewing platform, with water gushing up towards the sky – occasionally catching the odd tourist off guard!

When the sea is extra lively, the area can even get cordoned off by the local police, with waves easily reaching over the walls and posing a danger.

The structures are the work of Eduardo Chilliada, a Basque sculptor born in San Sebastian. And despite El Peine del Viento consisting of three “combs”, they actually form a series of 23 sculptures created by Chilliada, who began the series 1952 and finished them as late as 1999. Some of which are now on show in the Reina Sofia Museum in Madrid.

Other Sculptures in San Sebastian

Whilst El Peine del Viento is probably the most famous in the city, it isn’t the only popular sculpture in San Sebastian, nor the only set of sculptures by Chilliada.

Dotted around the city you’ll find a number of different sculptures that are worth visiting.

Just up from El Peine del Viento, towards the Miramar Palace, you’ll find the Pico del Loro (The Parrots Beak) which is a passage of rocks between La Concha beach and Ondarreta beach. The view point offers some of the best views of Santa Clara Island and also is home to Eduardo Chilliada’s “Embrace” sculpture.

The sculpture is a similar style to El Peine del Viento, made from steel and was installed in 1992.

Continuing further towards La Cocha, you’ll then arrive at another Chilliada piece “El Homenaje a Fleming” or the “Homage to Fleming” as it translates to English.

The sculpture has been homed in a number of places within the city, but now sits on one of the lookout balconies on the promenade of La Cocha. The setting makes the perfect place to sit on the steps and admire the local granite stone sculpture. The backdrop also offers some of the best views of Donostia and Santa Clara Island.

If you continue along the promenade of the bay of La Cocha, through the port and the Old Town, you’ll arrive at Paseo Nuevo. Paseo Nuevo, at the foot of Monte Urgull, is at the opposite side of the bay to El Peine del Viento but the two sides of the bay are joined together through the sculptures.

Whilst Empty Construction wasn’t designed by Chilliada (it was designed by Jorge Oteiza), it does have a similar feel, also being made from steel. The sculpture is a more contemporary piece and standing at 6 meters tall, it’s become a landmark for the city.

The area where the sculpture sits is a great place to walk or sit and watch the sunset on a nice evening.

If you’re interested in more of the sculptures dotted around San Sebastian, you can check out this guide here.