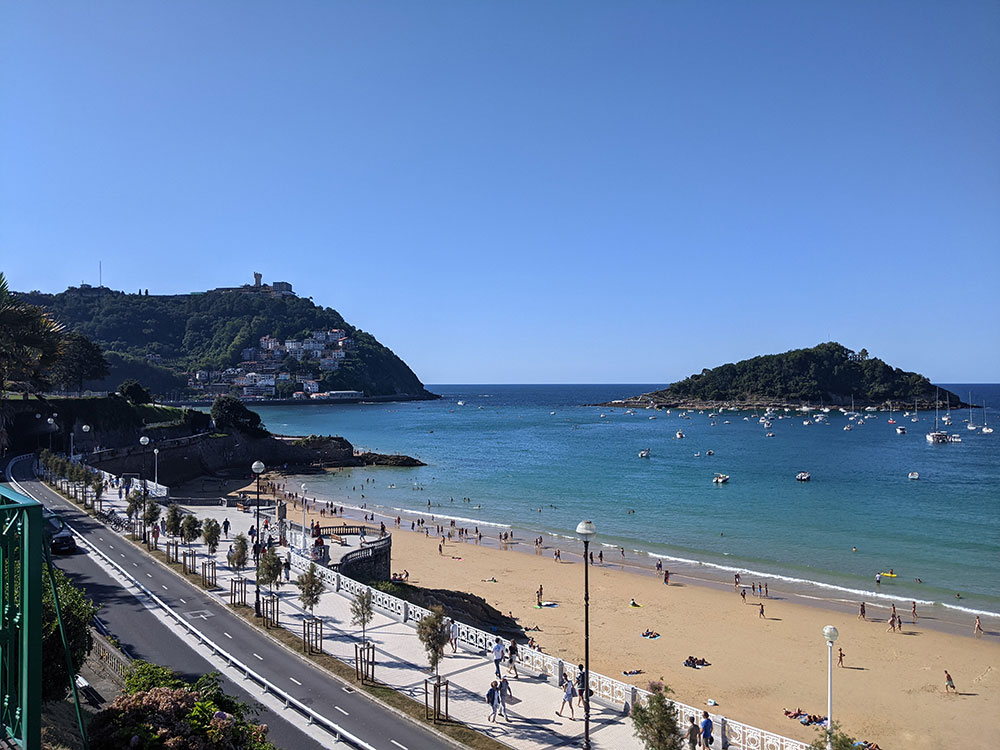 Santa Clara Island is the name given to the small island that lays in the middle of La Concha Bay. It sits smack bang in the middle, with Monte Igueldo to one side and Monte Urgull on the other.

It makes for the picture perfect postcard from La Concha Beach. But there’s more to the island than simply just being pretty to look at.

What to do on Santa Clara Island

Despite measuring just 400 meters wide and little over 5 hectares in total, the island has a lot of character built into such a small space.

The first thing that’s noticeable from the mainland, is the small white building on the East side of the Island. Well, the building is actually a lighthouse.

The lighthouse dates back to 1864 and was derelict for a number of years. But recently it has been transformed as the setting for Hondalea (Marine Abyss), a geological sculpture by Spanish artist Cristina Iglesias.

It’s an impressive sculpture that fuses the natural environment together with art, something that’s become a bit of a theme in San Sebastian with El Peine del Viento another key landmark in the city.

But this sculpture in particular pays tribute to the unique rock formation and geological phenomenon of the Island of Santa Clara.

The lighthouse is open to the public and tickets can be bought online here.

OK, so throughout Discover Donosti, we claim that San Sebastian has three beaches. However (spoiler alert), Donostia technically has four!

That’s because during low tide, the beach at Santa Clara appears from beneath the sea to deliver a 30 meter strip of paradise.

Most say that the best view in San Sebastian is from La Concha beach. But it could well be argued that the opposite is true, and the view of La Concha from the Santa Clara beach is the best.

But just because the beach is small doesn’t mean it lacks facilities. During summer, there’s a small bar and terrace and even a small natural swimming pool with sea water!

So whether you turn up at high or low tide, there’s always somewhere to take a dip and enjoy a bite to eat or a quick drink.

Take in the views

If sitting on the beach isn’t your thing, then you can hike up Santa Clara Island to take in some of the views.

You can walk up the island path which reaches 48 meters in height, and take in some breathtaking views of La Concha Bay from an angle rarely seen by many.

At the top there’s shaded spaces with picnic tables or grassy areas where you can simply chill out and watch the occasional boats sail by.

How to get to Santa Clara Island

There are a number of ways to get to the island, some more adventurous than others.

The easiest way to get to Santa Clara Island is by boat. Motoras de la Isla is the name of the company that operates the service and has been doing so for the past 80 years.

The blue service is just a little bit extra but will give you some impressive views of the rock formation on the island. It also runs a little less infrequently than the red service, so it’s worth checking or booking online in advance to avoid disappointment.

Whilst the most popular way to get to the island is by boat, it is possible to swim to Santa Clara Island all year round.

The Island is just half a kilometer away from the bay, and it actually provides protection to the bay waters meaning they’re usually fairly calm. If you’re in decent shape it’s not a challenging swim, with many families choosing to do it together.

From the western point of Ondarreta beach, the swim is just over 400 meters, which is the shortest, most direct and easiest route to swim. And in summer, there are even several floating platforms half way which offer a nice welcome break where you can rest or have fun on the slides.

Overall, even at a leisurely pace, it’ll take around 20 minutes to swim to the island. Be aware of your own limits though, and assess the water and tides before committing to it.

If the thought of swimming to the island makes you a little nervous, but you want a bit more excitement than the boat, another good way to get to the island is via. Kayak or paddleboard.

You can readily rent the equipment for a couple of hours from a number of places around La Concha beach. Another benefit is that you can explore other areas of the Island or the bay.

Just remember, you may easily make it there, but you also have to make it back!