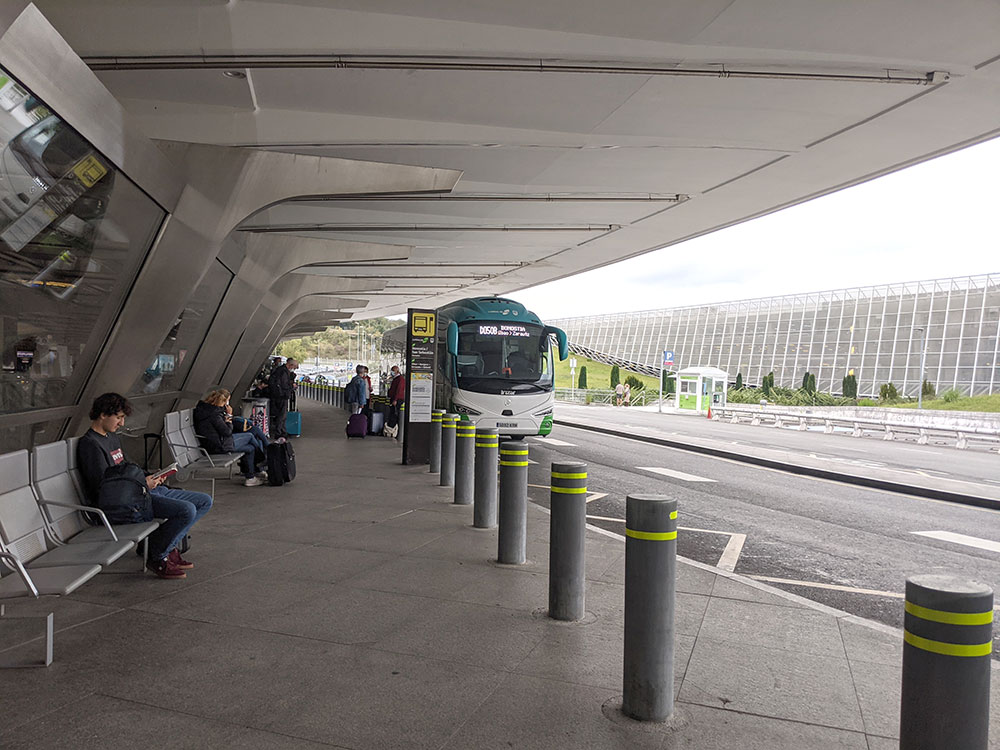 Whilst San Sebastian does have its own airport, it’s fairly small and only has flights from a select number of destinations (usually domestic) each day.

However, the good news is, if you’re planning to visit San Sebastian (Donostia), there are a number of airports near the city that make it accessible from all over Europe. The largest and probably the most commonly used airport is Bilbao, as it’s just under 100km away and has a number of International flights per day.

In this article we’ll run through the best options to get to San Sebastian from Bilbao Airport. If you’re looking to get to Donostia from Bilbao City Centre, we have a separate post on that here.

The easiest and cheapest way to get from Bilbao Airport to San Sebastian is by bus.

There’s a direct bus service from the Airport which has one stop in Zarautz, before dropping you off at the main bus station in the centre of San Sebastian. In total, the journey takes 1 hour 15 minutes.

The bus is located on the far right hand side of Bilbao Airport as you come out of the arrivals terminal.

The buses are run by a company called PESA and they have an electronic ticket machine which accepts credit and debit cards (highlighted on the above image).

The ticket machine can be a little temperamental. If it’s not working you’ll need to buy a ticket directly from the driver on the bus.

The drive won’t accept card, so it’s worth having the cash when you land. If you don’t have cash, there’s a cash machine in the terminal building (it’ll charge you to withdraw money though!).

You can also take the bus the other way from San Sebastian to Bilbao Airport. The bus leaves the main San Sebastian bus station every hour on the hour from 05:00 – 21:00.

Whilst the bus is the cheapest way to make the journey from Bilbao Airport to San Sebastian, not everyone is prepared to wait around if the arrival time doesn’t match up with the bus timetable, or if the flight has been delayed.

In that case, the easiest way to get to Donostia is by taxi.

There’s a taxi rank outside the main arrivals terminal where you can quickly and easily get a cab. In the earlier or later hours of the day, you may have to wait a little, but otherwise there should be a few taxi drivers waiting there for a job.

The route will be the same taken by the bus so will take around 1 hour 10 minutes.

If you’re planning to hire a for your stay in the Basque Country, then hiring a car from Bilbao Airport to make your way to San Sebastian makes sense.

All the major car hire companies offer car rentals from Bilbao Airport and have pick up locations on site.

Once you have your hire car, you can take the autopista (motorway) directly to San Sebastian. Again the journey takes around 1 hour 10 minutes. The motorway is a toll road and will cost around €11 one way. You can pay for the tolls with card, so you don’t need to worry about having cash.