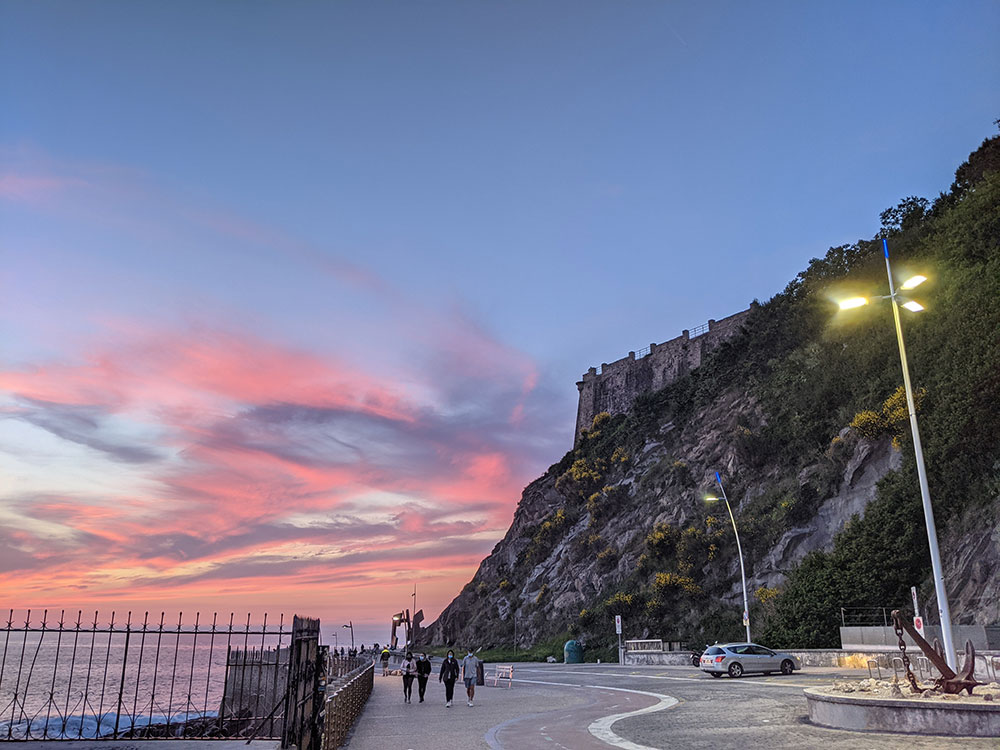 Starting at the San Sebastian Aquarium, it’ll take you around 40 minutes to work all the way around the promenade to the Zurriola Bridge and Kursaal.

The whole time you have views of the horizon over the Cantabrian Sea. It’s the perfect place for an afternoon stroll or a sunset walk.

A few things to know about Paseo Nuevo

What’s so special about Paseo Nuevo and why should you visit? Well, we’ll explain all below.

Starting from high (above the San Sebastian Aquarium), you’re greeted with panoramic views over La Concha beach and Ondaretta beach with the city as a backdrop and the mountain tops in the distance.

The starting point is also the perfect place to get an up close view of the magnificent rock formations that make up Santa Clara Island – something that isn’t visible looking out from the bay.

As you continue around Paseo Nuevo, the whole time you have uninterrupted views of the Cantabrian Sea. You can see out for miles! It’s easy to spend a few minutes just leaning on the wall watching the boats go past.

Once you arrive at the far corner of the promenade, you’ll then begin to get views of Gros and the prominent Kursaal building. Here you can see the impressive boulders that line the river banks in order to stop the waves reaching the mainland.

The waves can catch you out

Whilst the boulders are there to stop the waves reaching the paths above, they occasionally fail!

Paseo Nuevo is breathtaking on a nice calm summer’s day, but it’s perhaps most spectacular on a stormy day when the sea is rough.

When the sea is choppy and the waves are big, they majestically crash against the sea wall. It’s an impressive sight! But it can also be unfortunate for unsuspecting passers by.

I’ve seen many tourists get caught walking next to the wall. They are happily walking along, taking in the views, only suddenly to be soaked by a wave that makes it over the huge sea wall.

Take our top tip and avoid being that person. If the ground is wet, walk around it!

The waves occasionally get so big (typically in the autumn and winter) that the police close Paseo Nuevo. When that happens, the fun isn’t totally ruined as you can make your way up to the north side of Monte Urgull and admire nature’s show from a safe distance.

Paseo Nuevo (or the land that it occupies) originally belonged to the military as part of the Monte Urgull defence for the city of San Sebastian. Over the years, there were many attempts from the council to get hold of the land, but without success.

However, at the turn of the 20th century, a royal order was granted for the city council to build a walkway at its own expense. And so the construction of Paseo Nuevo began.

Building the walkway was a huge accomplishment. The sea walls reach 10 metres in height. They are also an astonishing 6 metres wide at the base and 2 metres wide at the top! But in just over a year, the first section of the promenade was complete.

It was inaugurated by Queen María Cristina on July 10th 1916 as “the greatest work of the time”, and just three years later the whole of Paseo Nuevo was complete.

Except it wasn’t called Paseo Nuevo back then.

In fact, the promenade has had many names over the years. It wasn’t until 1979 that it became known as Paseo Nuevo, the name it is now popularly known by.

How to get to Paseo Nuevo

The promenade is easily reachable from pretty much anywhere in San Sebastian.

Handily, there’s a public car park on Paseo Nuevo, nearer the Aquarium. Space is limited so if you can’t find a spot there, the whole stretch up from the Zurriola bridge has on street parking too.

You can check out the Paseo Nuevo route on the map below (blue line). It’s part of our interactive downloadable map of San Sebastian.

Things to do near Paseo Nuevo

Close by to the Old Town, there’s plenty going on after your stroll along the seafront.

Whilst you’re admiring the views from Paseo Nuevo, you’re likely to see the odd boat or two. Many of these come directly from the Port of San Sebastian which is just a short walk away from the Aquarium.

The port area is another nice tranquil spot in the city. It’s home to some of Donosti’s best fish restaurants. If you have more of a sweet tooth, one of my favourite pastimes is to grab an ice cream and watch the world go by from the long port wall.

If you’re walking all the way around the Old Town, it´d be rude not to actually head into the Parte Vieja itself.

Walking can be hungry work, so after your excursion around Monte Urgull, what better plan than to grab some pintxos in one of the many tabernas.

We’ve already mentioned that Monte Ugull is the best (sometimes only) spot to watch the waves crashing against the sea walls when the water is particularly choppy. But it’s also worth visiting in its own right.

If you start your walk from the Aquarium, when you get towards the end (near the Zurriola bridge), head down Calle San Juan which will take you to Plaza Zuloaga. Just beside the San Telmo Museum is the best route to the top of Monte Urgull.