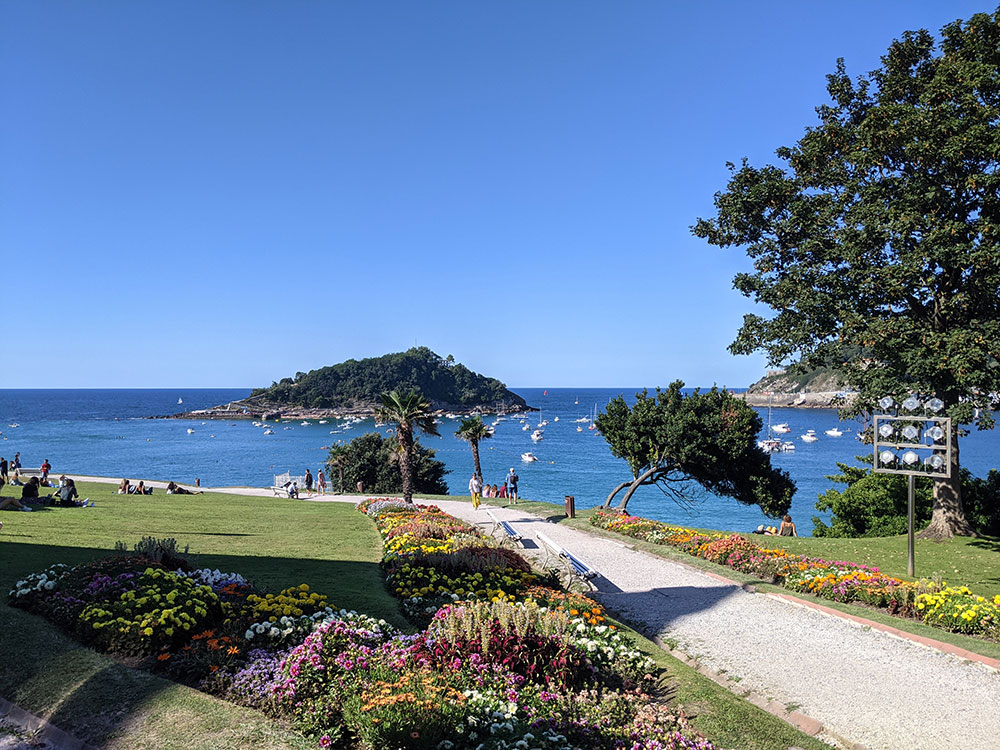 The Miramar Palace stands prominently on the San Sebastian coastline between Ondarreta Beach and La Concha Beach. It’s the first thing your eyes are drawn to as you look towards the city from the La Concha Bay.

Whilst it has a prominent location, it’s actually one of the best spots in the city to get away from all the noise.

The gardens that fall within the grounds of the Palace offer a calming and tranquil setting to take in the views of La Concha, read a book or even take a quick siesta.

Together, the history, architecture and gardens make this a site that should be on everyone’s itinerary when visiting Donostia.

Things to know about the Miramar Palace

The palace also has a rich history in the city. If you want to discover the best of the Miramar Palace, read on below.

It’s where the Spanish Monarchy used to spend the summers

The close relationship between the Spanish crown and San Sebastian started with Queen Isabel II. She was recommended by doctors to bathe in the sea to help her skin problems and thus chose La Concha as the place to do so.

Queen María Cristina reinforced the bond when she was widowed and began to spend her summers in San Sebastian.

Eventually, it was decided that the monarchy needed a summer house in the city, and the Queen settled on the location on the La Concha Bay. The building of the palace was ordered, and it was eventually completed in 1893.

Over the years it was added to, with the Prince’s Pavilion added in 1920.

After the death of Queen María Cristina in 1929, the palace became property of the city council on the condition that it would serve as a summer retreat for the President of the Republic.

Another condition was that part of the palace would be used for educational and cultural purposes, something that is still the case today, with summer courses from the University of the Basque Country taking place at the palace.

The architect of the Miramar Palace was Englishman Selden Womun. It’s no surprise then that the palace has a design reminiscent of an English noble country house with a touch of neo gothic ornaments.

Womun used the ochre and brown tones of the facade to combine with the greens from the gardens and blue sky to give a striking contrast. Today, the outside still stands as originally designed.

The building can be admired from the palace gardens themselves, or even from as far as Santa Clara Island or Monte Urgull.

The rest of the palace has been renovated since being acquired by the city council.

Take a time-out in the gardens

Nowadays, with the Miramar Palace as an open public space for all to enjoy, it’s the gardens that get the most use from Donostiarras (people from San Sebastian) and tourists alike.

Head there on any nice day and you’ll find cuadrillas (groups of friends) sitting in the palace gardens chatting away, people reading books, people taking a quick siesta or even couples just simply taking in the magnificent views.

In fact, it’s easy to see why Queen María Cristina chose this location as it offers some of the best views over La Concha Bay and Santa Clara Island.

And what better way to admire the impressive backdrop than in the floral gardens of the palace.

If you’re not one for taking a moment to chill out, then taking a stroll in the gardens is a good way to enjoy the palace and pass the time. There’s a walkway that weaves between the mature trees and floral centrepieces that offers a tranquil break from the city centre.

How to get to Miramar Palace

Sitting at the heart of La Concha Bay, the Miramar Palace is easily accessible from the centre of San Sebastian on foot.

There’s a short walk up from Calle Miraconcha, either up the steps at the rock formation Pico del Loro (Parrots Beak in English) or you can walk up the parallel street that rises to the palace (near the Spar Supermarket) just after La Perla.

If you’re coming from further away there’s a bus stop just outside the palace on the city centre side where the number 16 and 18 buses stop.

If arriving by car, there’s a small car parking space at the Miramar Palace which is pay and display.

However, most of the nearby streets are also pay and display so there’s plenty of options although the spaces do fill up quickly, especially on a nice summer day when people from nearby travel to San Sebastian to go to the beach.

Things to do nearby the Miramar Palace

After a pit stop in the Miramar gardens, there’s plenty to see nearby. Below are out top 3 picks.

Given the palace’s prominent location on La Concha Bay, the chances are you would have been to La Concha beach already. If you didn’t make your way down to the sand, then now is your chance.

You can make your way down to the beach at the end of the palace garden and take the opportunity to enjoy one of San Sebastian’s gems, El Pico del Loro, a stunning rock formation between La Concha beach and Ondarreta beach.

From El Pico del Loro you have the option to exit at either La Concha beach or Ondarreta Beach (provided there’s a low tide). If it’s high tide, the access points will be covered by the sea and you’ll have to put on your swimming trunks to access the beach.

If you don’t fancy getting in the sea, you can access Ondarreta beach from Paseo de la Concha. Taking this route down to Ondarreta beach will give you the chance to explore the gardens at the entrance of the beach too.

If it’s not quite sunbathing weather, then continuing your walk from Ondarreta beach to El Peine del Viento is probably your best bet.

Make your way round Paseo Ondarreta, past the tennis club until you reach the famous sculpture by Eduardo Chilliada. El Peine del Viento is most impressive when the tide is high and the sea is choppy!