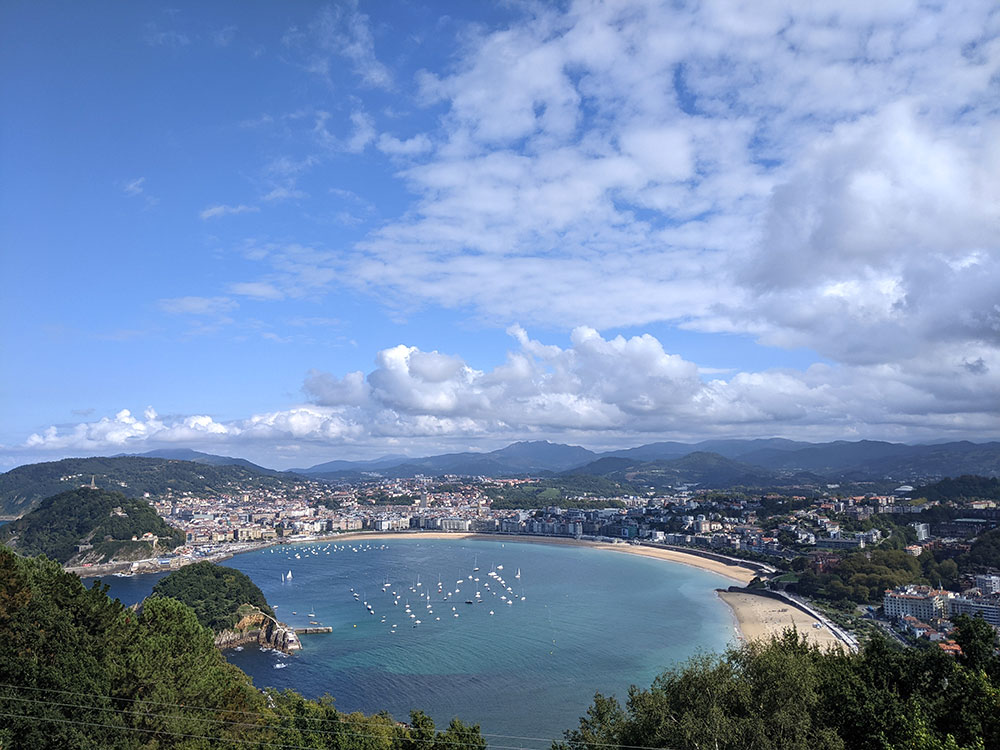 Antiguo is a special barrio (area) of San Sebastain. Despite being over 2km away from the centre of the Old Town, Antiguo (which means old in Spanish) is actually where the first Donostiarras resided.

Originally emerging as a farming village outside of the city walls tens of centuries ago, as the city has grown it has extended to bring Antiguo as part of San Sebastian.

Today, the neighbourhood has a larger population of locals living here than some of the more central areas in the city. As a result, it’s a place with its own character and pace of life.

That doesn’t mean it’s not a good spot to stay on a break in San Sebastian or visit whilst you’re in the city.

No. There’s plenty going on in Antiguo.

Despite being a small neighbourhood, it has its own beach, mountain, theme park and some of San Sebastian’s must visit attractions! So read on to find out why you should visit.

Things to see in Antiguo

The Antiguo neighbourhood of San Sebastian has some of the city’s most important buildings and monuments. It’s also a place of natural beauty with plenty to explore.

We’ll run through the top things you have to see on a visit to the barrio.

Ondarreta beach is at the heart of Antiguo. It’s the smallest beach in Donostia – but still a decent size for a beach in the city centre, at 500m long!

It’s mainly used by the locals and students of the nearby University, as they look to avoid the crowds of tourists on the larger La Concha and La Zurriola beaches. This means it’s a great spot for a more relaxing few hours sunbathing on the beach.

If you prefer a bit of shade, then the Ondarreta gardens at the entrance to the beach is a lovely tranquil corner of Antiguo, shaded by the distinctive tamarix trees.

Between Antiguo and the Area Romantica stands the impressive Miramar Palace.

The English style palace was the Royal’s official residence in San Sebastian before it was passed to the council after the death of Queen Maria Cristina in 1929.

As well as being one of the most iconic buildings in Donostia, within the palace grounds are the large gardens. They have some of the best views of La Concha Bay and offer a tranquil setting away from the noise of the city.

On a nice day you’ll find plenty of cuadrillas (groups of friends) sitting in the palace gardens, people reading books, others taking a quick siesta or even couples just simply taking in the magnificent views.

El Peine del Viento or “Comb of the wind” (in English) is a set of three sculptures positioned at the foot of Monte Igueldo at the end of Ondarreta beach.

The large steel sculptures are one of the most popular spots to visit in the city.  They are anchored to the rocks where the sea meets the land making them “active” living sculptures.

But it’s when the sea is rough that El Peine del Viento really comes alive!

Alongside the might of the sea crashing against the rocks, there are a number of blow holes which create a geyser style effect on the viewing platform.  Water gushes up towards the sky and can occasionally catch the odd tourist off guard!

The San Sebastian funicular originally opened in 1912 to transport the city’s rich people from Antiguo up to the casino on Monte Igueldo (which is now a hotel).

Today, the funicular is still in use, but transports tourists to the Monte Igueldo Amusement Park instead.

It uses the same equipment and vehicles as the very first day which has made it an attraction in its own right. The two wooden carriages have been well looked after to make it one of the best preserved funiculars in Spain, recognised by its Monumental Landmark status.

As you rise all 320 metres, the funicular offers some pretty impressive views overlooking the city.

Monte Igueldo is located at the far end of Antiguo and San Sebastian. It separates the main city from the quarter of Igueldo (which actually forms part of San Sebastian, but is more of a separate smaller town).

The mountain is one of the most iconic places in San Sebastian (and a must-visit) for a number of reasons.

Firstly, sitting high above San Sebastian, it offers some of the best undisrupted views of the city. Day or night, it really is hard to find a view as impressive as that from Monte Igueldo.

Secondly, despite being just a 10 minute funicular ride or 30 minute hike from Antiguo, you’re transported to the tranquillity of the countryside. It’s a great place for hiking and taking in the impressive coastal views.

And finally, it’s home to the Monte Igueldo Amusement Park. The park has been a landmark of the city for over 100 years, having first opened its gates in 1912.

Today a Monumental Landmark, it’s a blend of history and fun.

The theme park doesn’t have amazing modern roller coasters, but it does have its own charm. Many of the rides have been around for a number of years and are fairly unique in today’s world. It’s a great place for both kids and adults!