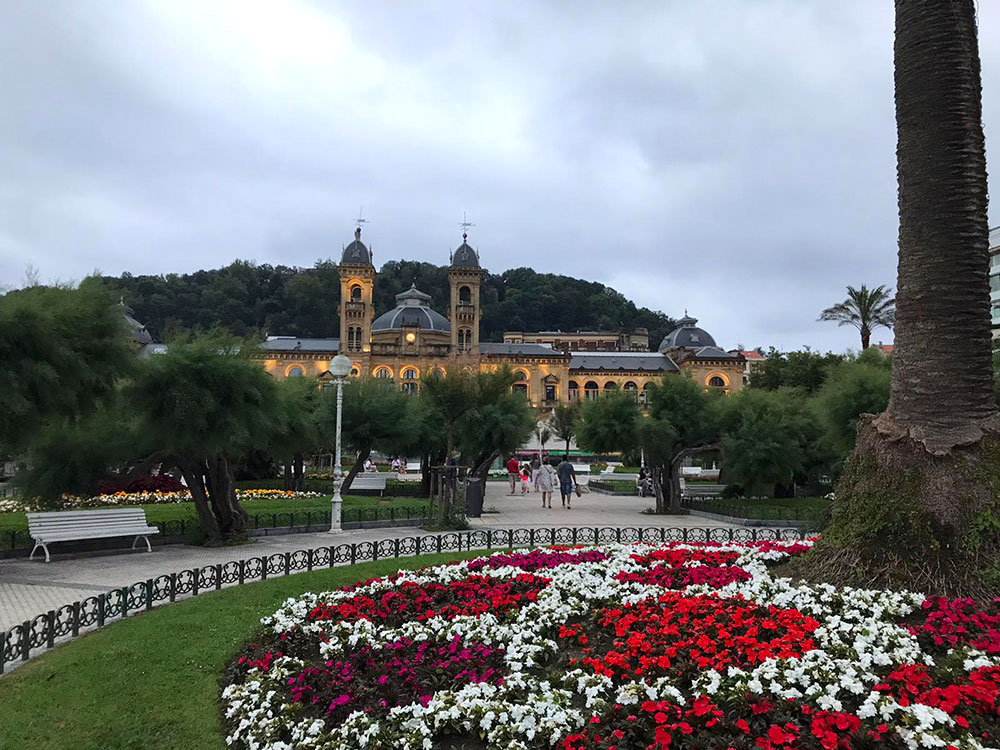 As San Sebastian started to gain fame after Queen Isabel II decided to spend her summers in Donostia, there was a need to expand to accommodate the new influx of tourists and aristocrats.

In 1863, it was therefore decided that the walls protecting the Old Town were to be demolished to make way for urban development.

Previously, San Sebastian only stretched as far as the Boulevard. But today, it acts as the border between the Old Town and the centre and a reminder of where the walls once stood. You can actually still see some remains of the original walls on the ground floor of the Bretxa market!

Now, the centre and Romantic Area of the city is the urban hub of the city. It’s filled with some of Donsotia’s top attractions, shops, coffee terraces alongside a number of charming pedestrianised streets and squares with beautiful architecture.

Things to see and do in the Centre and Romantic Area

As well as housing some of the top attractions in the city, there are plenty of pleasant surprises in the romantic area of San Sebastian.

We’ll run through the top things you have to see in the area.

La Concha is not only the centre’s main attraction, but San Sebastian’s star attraction.

The growth in popularity of San Sebastian all started here, when Queen Isabel II chose La Concha as the beach to bathe in the sea and help cure her skin problems.

And it’s easy to see why! It’s a perfect postcard setting that’s previously been voted as one of the best beaches in Europe.

But it’s not just the sea and sand that make La Concha special.

Paseo de la Concha (the promenade) sits high above the beach offering impressive views of La Concha Bay. The whole route stretches to nearly 2km, from the City Hall down to the Antiguo tunnel (near the Miramar Palace).

It’s framed all the way by the famous white railings, and the walkway is the perfect setting for an evening stroll. There are plenty of things to discover on the way, all whilst admiring the views over the bay.

2. Fall in love with the ​​Belle Époque architecture

The Romantic Area of San Sebastian contains some of the city’s most impressive architecture.

Most of these buildings date back to the Belle Époque period from 1871 to the outbreak of WWI in 1914. Largely considered as the “Golden Age” of continental Europe, a period of optimism, peace and economic prosperity, identified in the architecture.

The City Hall (which was originally built as a casino), La Perla Spa, The Funicular Rail Station Building and Koldo Mitxelena Library are all fine examples of this stunning architecture.

But it’s arguably the Victoria Eugenia Theatre and the Maria Cristina Hotel which are most impressive.

For over 100 years, this magnificent duo have stood side by side on the banks of the River Urumea. Today, they play a big role in the International Film Festival held in San Sebastian each year.

The theatre being the principal hub of the festival, and the Maria Cristina Hotel is where some of the world’s biggest movie stars have stayed when visiting Donostia.

3. Go on a shopping spree

San Sebastian has a diverse range of shopping options. The city offers the very best of your typical high street brands, alongside alternative establishments giving a stylish, chic touch.

The city can be broken down into three primary smaller concentrated shopping districts.

The Old Town is home to traditional independent shops, souvenirs and delicatessens offering the best in Basque cuisine. Whilst the Gros district is the best area for all your sports requirements, (from surfing to mountain gear) alongside a selection of antique shops.

Finally, the centre and Romantic Area is the place for all of the high quality International brands and high street fashion shops. Calle Hondarribia and Loiola are at the heart of the shops in the central district.

But San Sebastian is a small city. So the advantage to shopping is that most of the stores are located in small concentrated areas, making it a very comfortable experience.

4. Take time out in Donostia’s gardens

After walking around all the shops and Paseo de la Concha, you’re going to want to take a break!

Catching your breath in one of San Sebastian’s many gardens is a good way to take a time out or find some shade on a hot summer’s day.

The Alderdi Eder Gardens situated outside the City Hall offers a good place to take in one of the most typical views of San Sebastain and La Concha Bay. The small pathways lined with tamarix trees, floral arrangements and antique carousel (a hit with the young kids) make this a beautiful, peaceful spot in the heart of the city.

A more English style garden (designed by a Frenchman), it’s home to towering trees, flower and plant arrangements and San Sebastian’s duck and swan residents. During December and early January it’s also the home to the popular Christmas nativity scene.

The River Urumea is a natural border for the Romantic Area of San Sebastian. It divides the centre from the Gros and Egia districts.

A wide river, it was historically an important transportation link for the nearby siderias (cider houses) and local villages to transport goods into the main hub of San Sebastian.

Today, you’re more likely to find kayakers than boats. But the River remains a prominent feature of the city.

It’s adorned with elegant walkways and cycle paths. A short walk up the River Urumea banks will lead you to some of the most important landmarks in San Sebastian.

Structures such as the Zurriola Bridge and Maria Cristina Bridge are definitely worth checking out.

The Buen Pastor Cathedral is easy to spot as you walk around Ssn Sebastian. The spire of the cathedral reaches 75 metres in height, rising above most of the buildings in the city. (It acts as a good reference point for finding your bearings when you first arrive!)

It’s one of the most iconic buildings in San Sebastian, having been constructed in the “Golden Age”, after architect Manuel Echave won the competition to design the cathedral.

Similar to the other impressive Belle Époque architecture buildings in Donostia (such as the Victoria Eugenia Theatre and Koldo Mitxelena Library, which is actually next door), the cathedral is made from sandstone, giving it the trademark yellow colour.

Whilst the cathedral itself is well worth a visit, the gardens and other buildings in the square make it an extremely photogenic part of San Sebastian.