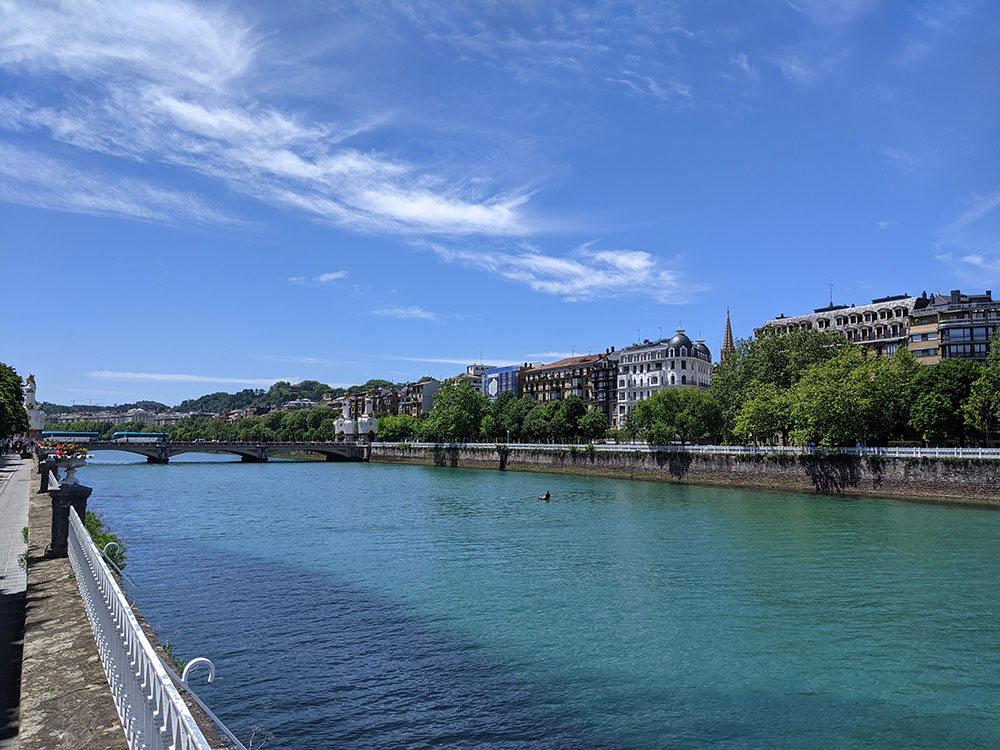 The River Urumea is a prominent feature in San Sebastian that divides the city. It enters San Sebastain in the Martutene district and works its way down to the Cantanbrian sea between Monte Urgull and La Zurriola Beach.

The River Urumea is quite a wide river. For decades it was used as a means of transportation, providing a link between local villages and rural areas to the city.

Mainly it was local Basque cider that was transported and for that reason it was also known as the Cider River.

Today, the River Urumea is adorned with elegant walkways. And a walk along the river banks is an excellent way to explore some of the architecture of Donostia alongside some of the city’s landmarks.

Landmarks on the River Urumea

Starting at the estuary, a short walk up the river gives you the opportunity to take in some of the beauty of the area alongside some of the landmarks in San Sebastian.

The estuary of the River Urumea is pretty much at the entrance of Kursaal.

Kursaal is a congress centre and auditorium. It is the centre of many cultural events that are regularly held in the city and has become an important building in San Sebastian since it’s opening in 1999.

The building itself however is quite a controversial one. It’s a very contemporary design (and quite big) compared to the buildings that surround it. Initially it was received by locals who either loved it or hated it.

The design aims to harmonise with the geographical environment of the Cantabrian Sea and the River Urumea. The building is split into two “cubes” which are made to represent two beached rocks to complement the hundreds that line the estuary outside of Kursaal.

Whether you love it or hate it, it’s hard to dispute the impressiveness of the structure. It’s worth visiting in the evening too, as the whole building is made from translucent glass and glows at night.

The Zurriola bridge is the first of six bridges that connect the districts of Gros and Egia with the centre of San Sebastian.

Opening in 1915, the Zurriola bridge has had a long standing presence on the seafront and sits right outside Kursaal (it’s also known as the Kursaal bridge). From the Gros side of the river, the Victoria Eugenia Theatre and Maria Cristina, both stunning buildings architecturally, provide an equally impressive backdrop.

For that reason it’s one of the prettiest bridges in San Sebastian. The bridge itself features 6 tall pillar lamps that have an appearance of chess pawn pieces.

Be careful when crossing the bridge during choppy seas and high tide. The waves have been known to catch out a few bypassers.

The Maria Cristina bridge is a little further up the River Urumea (about a 10 minute walk from the estuary) close by to the main bus and train station.

Originally it was constructed as a temporary wooden structure, but in 1905 the bridge as it stands today was opened.

The bridge is named after royalty and it’s fit for royals as it’s arguably the most elegant bridge in San Sebastian. It features four obelisks (two at each end of the bridge) which reach an impressive 18 metres in height.

The bridge has some stunning detail, from the sculptures that complete the obelisks to the red artificial stone decoration. It’s worthwhile getting a close up view of the structure for yourself.

It’s some 2-3km from the city centre of Donostia, so it has its own small town vibe, with a population of just over 6,000.

If you’re after a longer walk or even a short cycle, a good option is to follow the River Urumea all the way to Loiola and then make the return trip.

Day to day you’ll regularly see people kayaking, paddle boarding, fishing and rowing up and down the River Urumea. It’s another feature that makes a stroll along the walkways one of my favourite pastimes in San Sebastian.

However, occasionally when there’s a big swell, you’ll even spot surfers in the river!

Whilst San Sebastian is a known destination for surfing, it’s not very often you can catch a wave at the mouth of the ocean and end up in the city centre!

Brave local surfers (who know what they are doing) relish the opportunity to live this unique experience.

Be warned though, it can be highly dangerous with many obstacles (such as bridges) in the way, so it’s probably best to leave the surfing to them and watch from one of the bridges that pass.