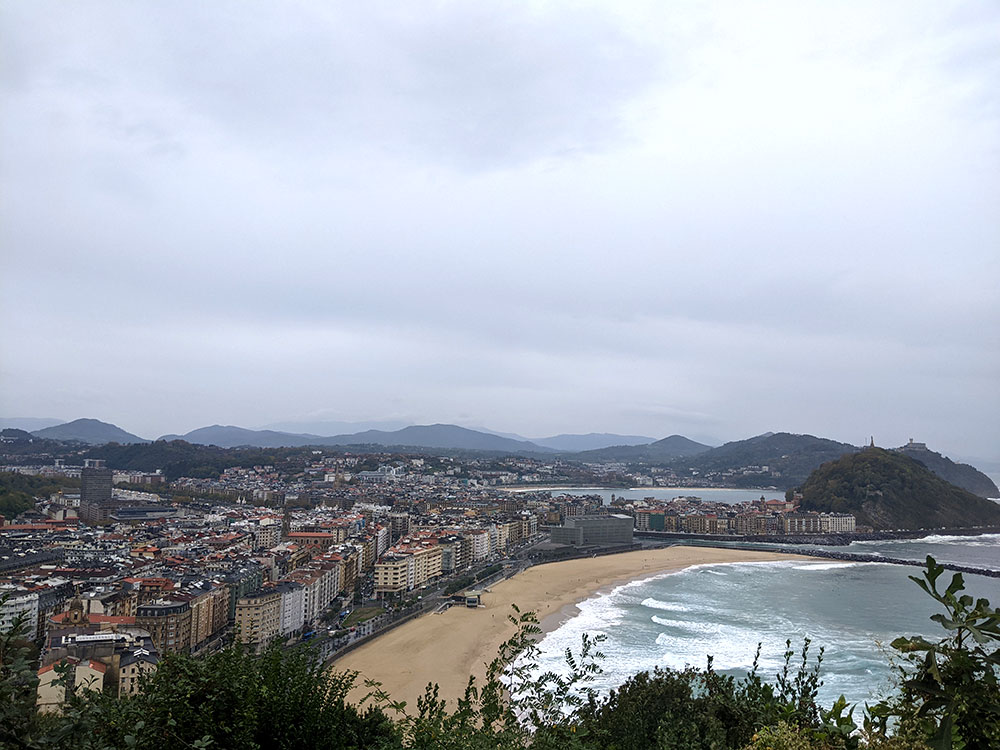 One of the things San Sebastian is famous for is surfing. And thanks to the Zurriola beach, Gros is where all the young, cool surfers hang out.

Over time, this has led to Gros becoming San Sebastian’s trendy neighbourhood.

The barrio (area) is located between the River Urumea and Monte Ulía. It’s easy to get to from the centre of San Sebastian. Just head east and cross either the Zurriola bridge or the Santa Catalina bridge and you’ll arrive into the district.

It’s the light blue area marked on our map of San Sebastian below.

Things to see and do in Gros

Gros has more to it than just being the hipster part of Donostia. The neighbourhood is bustling with life (day and night).

It’s the centre of the expat community and international visitors during the summer when people come from all over to surf on La Zurriola beach. This creates a unique atmosphere, one that’s not to be missed on a trip to San Sebastian.

The Zurriola beach is at the heart of Gros, so it’s only fair that we start here.

The beach is the number one spot for surfing in San Sebastian. Being a little more exposed to the force of the Cantabrian Sea than La Concha or Ondarreta means the waves are bigger and more consistent here.

Outside of surfing, the beach is generally the main hang out spot for the young Donostiarras (people from San Sebastian). During the summer evenings the beach is flooded with groups of friends playing music, sun bathing, playing beach volleyball and generally hanging out.

The Zurriola also plays an important part in the summer Jazz Festival. Once a year (in July) the beach converts itself into a spectacular concert venue to put on a show for the people in the city.

It was perhaps most impressive when Jamie Cullum brought out 50,000 people to the Zurriola for an unforgettable night.

As a congress centre and auditorium, Kursaal is one of the most important buildings in the city. It’s the centre of a number of cultural events in San Sebastian’s jam packed calendar.

But above all it’s a centre of controversy.

Opening in 1999, it’s fair to say the design has had a marmite reception from the people of San Sebastian. People either love it, or hate it.

The contemporary design is a stark contrast to the surrounding older buildings. But it’s designed to blend in with the river banks of the River Urumea.

Make a visit for yourself to decide. The building is most impressive in the evening when the translucent glass allows Kursaal to glow in the night sky.

Plaza Cataluña is the heart of the Gros neighbourhood.

The square itself is nothing special, it contains a children’s playground, a church, gardens and a large pedestrianised area that’s used during events and festivals.

But around the square are some of Gros’ best pintxo bars! A stroll down Calle Zabaleta, Goñi or Peña will lead you to most of these, including Bar Zabaleta which serves one of the best tortillas (Spanish omelette) in San Sebastian.

On a Thursday (or other nights during the week) some of the bars around Plaza Cataluña also offer pintxo pote – the Basque Country’s equivalent of happy hour! It basically means you get a drink and pintxo at a reduced price.

Outside of eating hours, most of the area’s best boutique shops are located around the square. From vintage fashion, to surfing gear and retro bikes, there’s something for everyone.

At the very far end of the Zurriola Beach, at the foot of Monte Ulía is a sub region of Gros, called Sagüés.

The long wall that sits high above the beach is the perfect place to watch the surfers or catch a spectacular sunlight and the sun sets behind the distant Monte Urgull.

On the other side of the wall is a skatepark and the Paloma de la Paz (Dove of Peace) sculpture by the Basque artist Néstor Basterretxea. Here’s where you’ll find the city’s skateboarders, roller bladers and BMXers.

But if you’re after a more chilled out vibe, then one of the bars that line Calle Jose Miguel Barandiaran is the perfect place for a caña (small beer). The terraces here are a sun trap, receiving sun most of the day.

Whilst most people on a visit to San Sebastian will make it up to Monte Igueldo or Monte Urgull, few will make the effort to make their way to the top of Monte Ulía.

And that’s a mistake, as from the top of Ulía you’re treated to some of the best views of San Sebastian.

Make no mistake, the hike to the viewpoint is probably the most enduring. It’s a short, but very steep climb up Calle Zemoria. But in my opinion, it’s well worth it.

Not only do you have some of the best views, but Ulía is also a rich natural landscape. So much so that it’s protected as a Special Area of Conservation by the European Union’s Habitat Directive.

Its forests are home to some 130 species of birds, numerous species of mammals, indigenous coastal oak grove trees and coastal cliff heathland vegetation.

If you venture through one of the many footpaths on the mountain, it’s hard to believe you’re just 20 minutes from the city centre!

For the more adventurous, a walk from Gros to the next town Pasaia (Pasajes in Spanish) will greet you with glorious coastal cliffs, unbelievable viewpoints and beautiful forest pathways. The walk takes around 2 hours 30 minutes to complete.