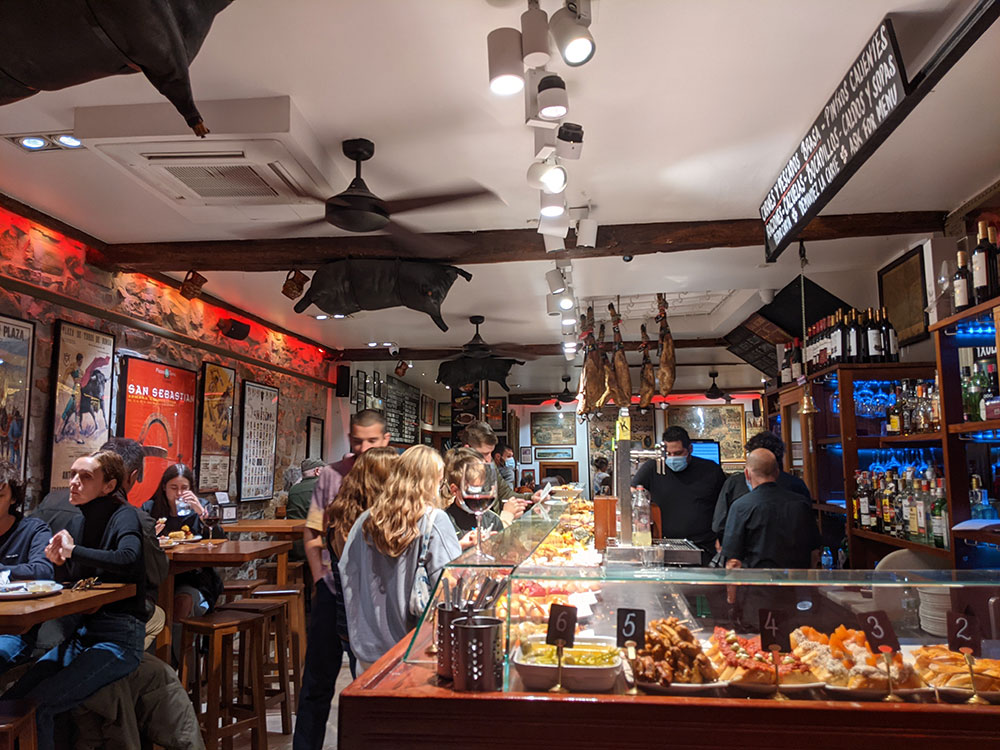 San Sebastian (Donostia) has become famous for a number of different things over the years. Arguably though, it was Queen Isabell II in the 1840’s that originally put San Sebastian on the map.

Her doctors recommended her to bathe in the sea to help her skin problems and thus she started to spend her summers in Donostia, bathing in La Concha beach. A number of aristocrats followed her and the town started to become famous as the preferred destination for the European upper classes.

The town grew rapidly and it’s fame as a summer city for the wealthy was only enhanced when Queen María Cristina constructed the Miramar Palace as her luxury summer residence in the early 20th Century.

Since then, Donostia has cemented and enhanced it’s economic and tourist potential, becoming synonymous with a number of things which we’ll run through below.

Back to where it all began, San Sebastian has always been famous for its beaches from the times when Queen Isabell II used to bathe in La Concha beach, originally starting the boom of the city.

The La Concha beach sits at the heart of the city and is a stone’s throw away from the main district and it’s image has been broadcast across the world with its picturesque seashell shape and views of the Santa Clara Island.

Despite its city centre location, the beach has previously been voted the best beach in both Spain and in Europe, testament to the idyllic location and beauty of La Cocha.

However, it’s not the only beach in San Sebastian. One thing that makes the city unique is that there are three beaches all within a short walking distance from the centre. Ondarreta Beach and La Zurriola make up the three with the latter being famous for surfing thanks to its lively sea.

San Sebastian is also famous for its quaint old town which is a maze of small, narrow streets brimming with life.

The old town sits at the foot of Mount Urgull and is naturally boarded by the sea / the port on one side and the River Urumea the other. Dating back, the Old Town also used to also have a city wall which was demolished in 1863 as the city grew and needed to expand.

The streets are filled with buildings that date back to the mid 19th century after the Old Town was originally destroyed in 1813 in a war against Napoleon’s troops. Today, the buildings are occupied with Pintxos bars, independent shops and bakeries which gives the Old Town a unique atmosphere and makes it a must visit for all tourists.

As well as tasting some of the famous local pintxos, there are places worth exploring such as the Plaza de la Constitución, San Vicente Church, Basilica of Santa María and San Telmo Museum.

After the beaches, San Sebastian is arguably most famous for its food!

The city boasts 19 Michelin stars, making it the city in Europe with the most Michelin stars per square metre. There’s also the pintxos, fresh seafood, Basque meat, delicious bakeries and local wines and ciders that make San Sebastian one of the best cities in the world to eat!

Eating out is a big part of the culture in Spain and in particular in Donostia. The Old Town is again at the centre of the action, with its famous pintxos bars that are bustling with life as tourists and locals jump from one bar to the next trying the different pintxos on offer.

For a more relaxed evening, you can try one some of the iconic local dishes in one of the seafood restaurants that line the port. With immediate access to the coast and the Bay of Biscay, you can expect some of the freshest seafood on offer.

San Sebastian was named European Capital of Culture in 2016 which celebrated the city’s breadth of culture in architecture, festivals, cinema, museums and sculptures.

When first you arrive in San Sebastian you’ll notice that it’s brimming with different types of architecture. From 16th century gothic style churches to the mansions and castles that overlook La Concha, down to more contemporary works such as Kursal, the city’s architecture has a bit of everything.

If you plan your visit for certain times of the year, you can also make the most of one of the many festivals and Basque cultural events that take place in the city too. Whether that be the San Sebastian International Film Festival, The International Jazz Festival or The Classical Music Fortnight.

Whilst walking around the city, you’ll read signs and hear people talking Euskera (the Basque language) which is a nod to the strong Basque heritage in Donostia.

Both Basque and Spanish are recognised as official languages in San Sebastian and the Basque province. The language is the oldest in Europe and its origin is still a mystery, even for researchers.

The language is just one of the links to tradition still evident in the city today. On your travels you may see some games of Basque Pelota being played in one of the Fronton’s dotted in and around San Sebastian and nearby towns.

If you pay a visit in January and are here on the 20th, you’ll also see the Tamborrada de San Sebastian, which is a festival in the city that dates back to 1830. The festival starts at midnight and lasts 24 hours where people from the city dress in traditional clothing and take to the streets playing drums.

Our last (but no means least) thing San Sebastian is famous for, is surfing.

As already mentioned, Donostia is home to three beaches, all within a short stroll from the city centre. La Zurriola is the beach on the far east of the city which is home to the biggest waves and the surfers.

The beach is the setting for numerous local, national and international surfing competitions each year and sees thousands of people make their way over to San Sebastian each year to hit the waves.

The surf culture is definitely ingrained in the people of the city, particularly in the Gros neighbourhood (the closest area to La Zurriola) where all the surfers usually stay. It’s not uncommon to see people running through the city bear foot, in a wetsuit with a surfboard under their arm.

If you’re interested in surfing in San Sebastian, check out our guide.