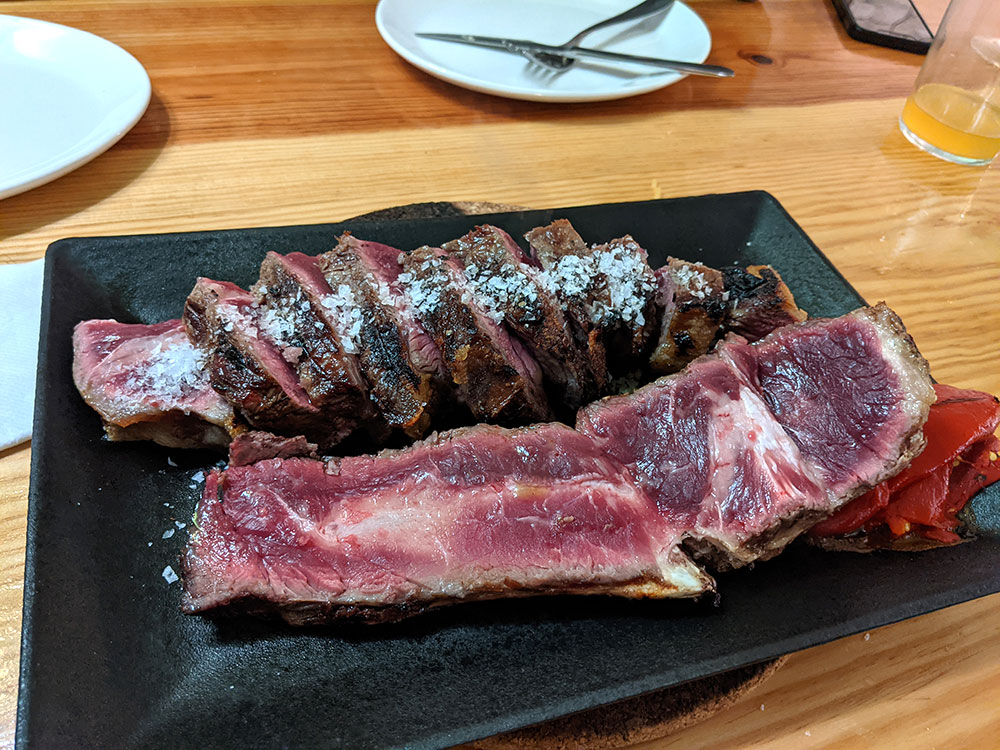 San Sebastian is without doubt the food capital of Europe.

It’s a foodie’s heaven with everything from a unique pintxo culture, some of the freshest seafood around, famous sideria (cider house) menus, fresh food markets and not to mention the 19 Michelin stars in the city!

But with all these options, it can become quite overwhelming in what to choose and where to eat on a visit to Donostia.

In this article we’re going to run through the top typical food from San Sebastian that we recommend trying.

What makes the food in San Sebastian so good?

Before we dive into the list of typical dishes to try, it’s worth appreciating why the food is so good here.

Donostiarras (people from San Sebastian) are brought up in a culture of meeting together with friends and family for food.

Whether it’s going for a few drinks and pintxos, or visiting one of the siderias (cider houses), food is always at the centre of any social gathering.

But perhaps the most influential factor in the city’s world famous cuisine is the abundance of gastronomic societies that exist in the city (mainly in the Old Town).

Txokos or elkarteak (gastronomic societies) is a concept where people get together to cook lunch or dinner. It’s sort of a restaurant-come-private diners club where cuadrillas (groups of friends) or families cook for one another and enjoy a long meal.

They came into existence in the mid-19th century when the city was heavily influenced by royals and nobles and eating out became expensive. The gastronomic societies would become places where men (women were forbidden) could go for extended lunches to talk about politics and business.

And their influence on the city has been huge.

During the dictatorship of Franco, they were one of the only places people could get away with speaking euskara (Basque). But they were also the birthplaces of many of the traditional Basque dishes we enjoy today.

You can’t make good food without good produce. And Donostiarras have come to expect a high quality when it comes to food.

With the popularity of the gastronomic societies and some of the world’s best restaurants, comes the demand for high quality ingredients.

The natural location of the city helps in a couple of aspects.

One, there’s plenty of fresh seafood available straight from the Cantabrian sea. If you want to try some of this, we recommend heading directly to one of the restaurants on the port of San Sebastian.

And two, the mountainous regions and local climate combine for some of the best conditions for meat cattle and fresh fruit and vegetables.

The result is that there are plenty of traditional fresh food markets in and around the city selling high quality produce. Generally, any restaurant in the city not using top quality ingredients won’t last long!

With a premium placed on high quality, fresh ingredients, it’s only right that the menus change throughout the year to accommodate the best produce that’s in season.

Most of our recommendations for food to try aren’t seasonal, but other dishes can be. For example, one of our recommended restaurants LABe regularly changes the menu throughout the year. This ensures you’re served nothing but the best seasonal produce.

If you’re here in the winter months, it’s the best time to try some of the best Basque drinks. Cider and txakoli come into season, and a trip to one of the siderias or txakoli vineyards is a must.

It’s also a good time for alubias (beans) from Tolosa (one of the recommended dishes below). This unique recipe with cabbage, black pudding and guindilla peppers produces one of the heartiest meals that will help keep you nice and warm!

OK, so now you know a little more about what makes the food so delicious in Donosti, it’s time to figure out what to try.

Below is our list of recommended typical dishes from San Sebastian. There is more of an emphasis on what to try, rather than why to try it, but we have included the occasional tip!

1. Anchovies (and the “Gilda” pintxo)

We start with the main ingredients in one of the most famous pintxos from San Sebastian.

Delicious anchovies come straight from the nearby Canabrian sea. They are served all year round, but are the best and most fresh in spring!

If you’re a fan of anchovies there are a number of different dishes you can try that contain slightly salty, melt in your mouth anchovies.

However, if you’re not convinced in trying anchovies alone, one of the best ways to experience them is with the gilda pintxo. This creation dates back to the mid 1900s and is served throughout the city’s pintxo bars.

The gilda from Casa Vallés in Reyes Católicos (near the Buen Pastor Cathedral) is extra special as this is the bar which gave birth to the famous pintxo.

Txangurro is a species of spider crab found in the Bay of Biscay, and a staple in Basque cuisine. It tends to have more succulent meat and a deeper flavour than common crab meat.

The Donostia style spider crab is typically stuffed, seasoned and baked in its own shell. It not only looks impressive, but tastes phenomenal!

The pintxo became famous as one of Queen Maria Cristina’s favourites and is served across a number of pintxo bars in the city.

But perhaps the best version is that on offer in  Bar Ganbara in the Parte Vieja (Old Town) which is a must-try on any pintxo tour!

A pretty simple dish (from an ingredients point of view), bacalao al pil-pil contains just cod, garlic and olive oil. It summarises the essence of Basque cooking, which is making extraordinary dishes from simple ingredients.

The key to the dish is the pil-pil sauce which is created by shaking or whisking the olive oil as the salt cod cooks and releases its natural gelatine.

Sticking with the seafood theme is another San Sebastian classic in kokotxas.

The cheeks of cod or hake are regularly thrown away in restaurants across the rest of the world. But the Basque country has found an exceptional use for them by the means of kokotxas!

The cuts are in abundance of gelatine which makes them perfect for pil-pil style cooking. The kokotxas de merluza (hake) are delicious and one of the top dishes you can try in the Basque country.

Txuleta (steak) is one of the Basque country’s famous dishes! This 5cm thick cut of meat is every steak lover’s dream.

But what makes the txuleta so good? Well, it’s typically a thick cut of meat from grass-fed animals that has been left to age longer than your typical steak. This gives it an enriched flavour.

It’s then cooked over a charred, smokey grill to give a crisp “crust”. Inside the meat is typically served medium-rare and a light sprinkling of salt is all that’s needed to cap it off!

Typically it’s served in the centre of the table to be shared amongst everyone.

The best place to try txuleta (to get the full experience) is at one of the siderias (cider houses) where it forms part of the traditional menu. However, in the centre of San Sebastian, we’d recommend Bar Nestor – if you can get a table!

This dish actually comes from the town of Tolosa which is less than 30km from the centre of San Sebastain. They are so proud of their traditional dish that they even have an annual 4-day festival in November to celebrate it.

The primary ingredient is the Tolosa bean which is a small dark purple to black bean. They grow from May to October, ready to deliver the perfect hearty meal in the autumn.

They are served in a vegetable broth with cabbage, morcilla (black pudding) and guindilla peppers. The combination is delicious!

In 1987, Idiazabal cheese was assigned a denomination of origin in Bizkaia. So technically speaking, this cheese comes from the province in which the city of Bilbao is situated.

However, it’s used vastly across the Basque country and the restaurants in San Sebastian know how to incorporate the cheese into their menus.

It’s a sheep’s milk cheese which is left to mature for a few months, developing a smokey, nutty, buttery flavour.

It can be eaten on its own, but many restaurants integrate the cheese into dishes such as risotto, or use it to create an accompanying sauce. Some even use Idiazabal as the cheese for the city’s signature dessert, the Basque cheesecake (see number 9!).

Torrija would be best described as Spanish style French toast.

It’s a popular dessert across the whole of Spain, but they say that the Basque country has mastered this long standing sweet recipe.

It’s another dish that embraces the simpleness of Basque cooking. It basically consists of bread that is soaked in milk, dipped in egg and then fried. Occasionally it may have a hint of wine or honey to make it a little sweeter.

Traditionally it’s served around Easter, but today it’s become a staple dessert option in a number of restaurants in the city.

With San Sebastian cheesecake, we’ve saved one of the best till last. If you have any sort of sweet tooth, you’re going to love this world famous dessert!

It’s slightly different to a normal cheesecake in two aspects. Firstly, San Sebastian cheesecake doesn’t have a biscuit base. Secondly, it’s extra creamy and perfectly light and smooth with a distinct cheese flavour.

But seriously, you have to try it yourself to believe us!

The best place to do so is at La Viña in the Old Town where the cheesecake has been on the menu for over 30 years. It’s where the desert originally started to gain worldwide fame. Most restaurants in the city will offer this on the menu though.

And if you fancy having a go at making one yourself, you can check out the recipe here.

The Pastel Vasco (or Basque cake in English) actually originates from the French side of the Basque Country.

But it has become a staple across most of the Basque Country, served with a coffee in the afternoon as a merienda (afternoon snack).

The cake is pretty simple, again optimising traditional Basque cooking. It’s cake with a dense pastry and a soft creamy interior. Every restaurant or pastry shop has their own recipe for this Basque classic, so you can actually get quite a variety of different versions. Some fill them with berries, vanilla pastry cream or with raisins.

You can pick one up at most coffee shops and patisseries in San Sebastian.