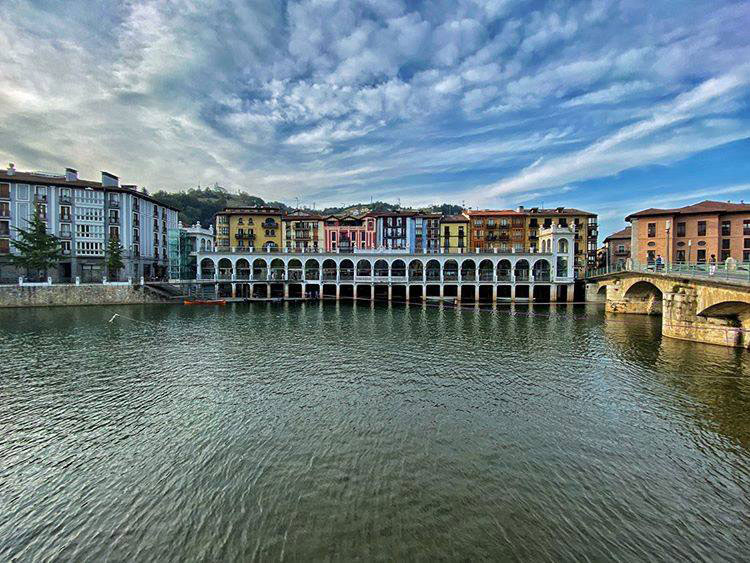 Tolosa is a small Basque town just over 30 minutes away from the centre of San Sebastian.

Historically it was a strategic commercial point for Gipuzkoa largely due to its location in the valley (and on the banks) of the River Oria.

Today, this means there’s plenty of history and things to explore in this unique town. Its location right next to the motorway makes it easily accessible and well worth a visit.

In the article below, we’ll run through what there is to see in Tolosa and why you should consider making a day trip from San Sebastian.

Things to know about Tolosa

Before we get into the things to do in Tolosa, there are a few things you should know which make this town worth visiting!

1. It’s famous for the beans

Yes, you read that correctly. Arguably Tolosa’s most famous export are Tolosa beans.

So what makes the Tolosa beans special?

Well, they are a variety of pinto beans, with a dark purple colour. They are oval and smooth, but it’s the flavour that makes them famous!

But don’t take our word for it. Tolosa beans have been classified as “very good” and “excellent” by expert tasters.

And the Tolosanos (people from Tolosa) are extremely proud of them. Today, they are still grown in the traditional way in local farmhouses.

They even have a week-long festival to celebrate the beans (Babarrunaren Astea) and local producers compete to earn bragging rights for the “best bean of the year”!

2. It’s the old capital of Gipuzkoa

The location of Tolosa on the banks of the River Oria was previously seen as an important trade route. It linked Navarra with the shipping ports on the Bay of Biscay.

Its strategic importance was even enough to earn the town the title of capital of Gipuzkoa.

However its reign was short lived. Tolosa was the capital for 10 just years, from 1844 – 1854, before the title was handed back to San Sebastian.

One of the many reasons to visit Tolosa is for the Tinglado Market.

People have been gathering in Tolosa each Saturday for centuries to buy local produce of the highest quality and freshness.

As well as being one of the oldest running markets in the Basque Country, it’s one of the largest. There are three separate areas which transform the town into a place of hustle and bustle each Saturday.

Things to do in Tolosa

So, now you know a little bit about the history of Tolosa, it’s time to get into the things to do here that make it worthwhile visiting.

If you’re in Gipuzkoa over the weekend, then it makes sense to visit Tolosa on a Saturday.

You’ll get to see the town transformed by the most famous vibrant market in the Basque Country.

Local farmers come here to trade all sorts of local produce. Some of the most popular products to pick up include the famous Tolosa beans, Ibarra chilies, Basque sheep cheese, Baque cider and chuletones de buey (T-Bone steaks that come from Ox).

Whilst you’re wandering round the market you can also take in some of Tolosa’s past by admiring the Medieval walls visible through the market’s glass floor.

We’ve talked about them a lot already in this article, but not no trip to Tolosa is complete without tasting some of the famous beans!

If you’re not confident in picking some up at the market and trying your hand at a Tolosa beans recipe, then head to one of the local restaurants and try them there.

The beans are harvested in September and October. So from mid-October, the Tolosa beans make the perfect winter-warmer dish.

The centre of Tolosa can be split into two parts: the Medieval Old Town and the Ensanche (new) centre.

The Old Town is a place with a glorious history. For centuries, the area has benefited from numerous privileges after King Alfonso X the wise granted the charter to the town.

Today, the Old Town is a mix of narrow streets complete with buildings, monuments and many old plazas (squares) that are well worth exploring.

Arguably the highlight is the Church of Santa María, the second largest church in Gipuzkoa. It’s a unique church with a combination of a number of architecture styles (Basque Renaissance, baroque and neoclassical) given it took over 200 years to build!

Other top picks include the baroque style Santa Clara Convent and the Baroque Town Council.

However, you can check out the full list of the unique buildings in the Old Town on the Official Tolosa Tourism page.

How to get to Tolosa

Tolosa is easily reachable from San Sebastian and beyond.

Once you’re in Tolosa, all the main attractions are all within walking distance too.

Tolosa is situated right by the exit of the A1 which connects the main cities in the Basque Country (San Sebastian, Bilbao and Vitoria) with Madrid.

From San Sebastian, the drive is just over half an hour. There’s plenty of on-street parking in the centre of Tolosa too.

Tolosa train station is located in the centre of the town on Geltoki Kalea 4.

The C1 Train from the train station San Sebastian takes around 30 minutes to reach Tolosa.

Lurraldebus has direct connections from the centre of San Sebastian to Tolosa. They take anything between 30 minutes – 1 hour depending on the route.

You can check out the timetable here.