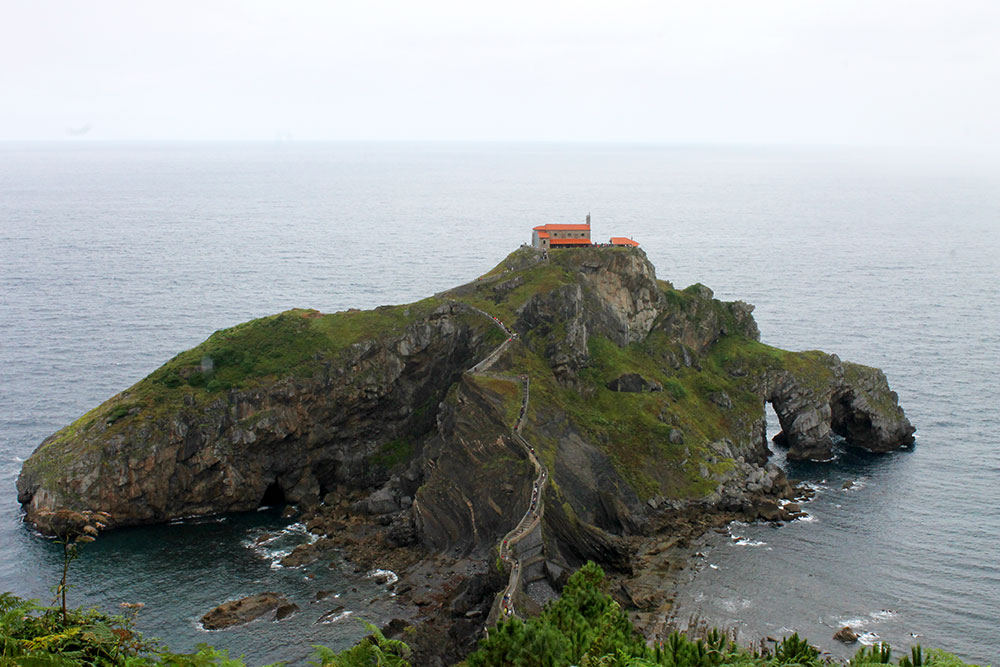 San Juan de Gaztelugatxe has exploded in popularity over the last few years thanks to the island’s incorporation in the hit series Game of Thrones.

But whether you’re a Game of Thrones fan or not, the uniqueness of this special island will take your breath away.

The island is located in Bizkaia (Biscay) between the towns of Bermeo and Bakio, making it an easy day trip from San Sebastian and Bilbao.

Game of Throne (GOT) geeks will know just how spectacular San Juan de Gaztelugatxe is. But if you’ve not seen the series, let us first convince you why you need to visit!

The island of San Juan de Gaztelugatxe is a natural gem in the Basque Country.

The rock formation is similar to that seen on the Northern Spain coast where the sea batters the mainland, creating stunning natural arches and caves.

But the island of San Juan de Gaztelugatxe has withstood the erosion better than the nearby rocks, resulting in it being split slightly from the land.

What makes the site special though is the man-made stone bridge that connects it to the mainland. The bridge then transforms to a path and stairway that spectacularly winds its way up to the top of the island.

In total there are 241 steps to navigate on the way to the top.

It’s quite a journey so be prepared with decent footwear! But the assent doesn’t seem too exhausting as you’ll be compelled to stop and take photos at every turn!

Thanks to the HBO series Game of Thrones, the popularity of San Juan de Gaztelugatxe has risen exponentially over the last few years.

In the series, the island is pictured as Dragonstone, the home of Daenerys Targaryen.

However, the Basque name of the island, Gaztelugatxe, actually translates to “castle rock”. “Gaztelu” translates to  “castle” and “aitz” to “rock”.

It’s one of a number of sites in the Basuqe Country used in the series.

Itzurun Beach in Zumaia and San Juan de Gaztelugatxe are combined in the series to form Drangonstone. Whilst Muriola Beach in Barrika is another set used in the series where Tyrion, Davos and Gendry escaped from the Gold Cloaks.

You may be disappointed, but as you accomplish the climb, at the top of the island there’s no huge castle. Nor are there dragons flying above!

No, instead the island is home to the small chapel of San Juan de Gaztelugatxe.

Use of the island dates back as early as the 9th century, but the chapel sitting here today doesn’t date back that long either.

Over the years the church situated here has been built and rebuilt a number of times after being damaged in attacks. The chapel that currently occupies the island was re-inaugurated in 1980 after it suffered further damage in a fire in 1978.

You’re able to enter the chapel and even ring the bells. Ringing them three times is said to bring good luck and chase the evil spirits away!

How to get to San Juan de Gaztelugatxe

The island is located on the Bizakia coast, between the towns Bermeo and Bakio. But as it’s set next to the sea in a fairly remote location, it’s not easy to get to with public transport.

Ideally you need a car, especially if you’re coming from San Sebastian.

From San Sebastian, you’ll need to take the AP-8 heading towards Bilbao before heading north to the coast. The journey will take just over an hour and a half. And be prepared to pay tolls as it’s mainly on a toll road.

From the centre of Bilbao, it’ll take around 40 minutes to reach San Juan de Gaztelugatxe by car.

If you don’t have access to a car, it is possible to get there on the bus from Bilbao.

Outside of the above, you’ll have to take the A3518 bus to Baiko and take the A3524 connection from Baiko to Bermeo which runs every two hours, stopping at Gaztelugatxe.

If you don’t have access to a car and can’t be bothered with the hassle of the bus (I wouldn’t blame you), then another good option to visit is as part of a tour.

There are a number of companies offering ​​San Juan de Gaztelugatxe tours from Bilbao.

If you’re a real Game of Thrones fan, you can even take the GOT tour and visit multiple sites in a day.

With the increase in the number of visitors to San Juan de Gaztelugatxe, the local council has worked hard to improve access.

There are now three car parks near the entrance (you can see them on the map below). There are also some areas where you can park on the street (you can see some parked cars on nearby roads in the map).

To help save you the stress of finding a parking space, it’s best to go early in the morning and avoid weekends if possible.

The good thing is that visitor numbers are controlled through a ticketing system with restricted times.

Entrance is free to San Juan de Gaztelugatxe, but you do need to get a free ticket in advance to enter.

You can get this on the door if you’re there in the really low season, but even still, it costs you nothing to book this in advance so it’s well worth it.

You can book your free ticket here.

Things to do near San Juan de Gaztelugatxe

Given San Juan de Gaztelugatxe is a little out of the way, it’s worth making the most of your day out and visiting a few other places nearby.

Butrón Castle is located between Bilbao and San Juan de Gaztelugatxe. It makes it an ideal place to break the journey up back to Bilbao or take a little detour if you’re heading back to San Sebastian.

It’s a castle from the Middle Ages that wouldn’t look out of place in Winterfell (Game of Thrones). It’s such a fairytale place, that it’s said Kate Middleton dreamed of getting married here.

Bermeo is a charming traditional fishing town on the coast of Bizkaia. It has a rich history dating back to the 13th century as one of the most important fishing ports in the Basque Country.

Today the town’s economy it’s still heavily reliant on the fishing industry. It makes it a perfect place to stop for some fresh seafood or take a walk by the marina and admire the colourful houses that overlook the water.

Mundaka is a quaint little town just to the south of Bermeo. The town is centred around the small fishing port, which makes a nice spot for a bite to eat (after your climb up to the top of Gaztelugatxe).

Despite having a population of less than 2,000 people, the town is actually internationally renowned for its quality of surfing. So after lunch, you can take a dip in the sea or catch some waves.