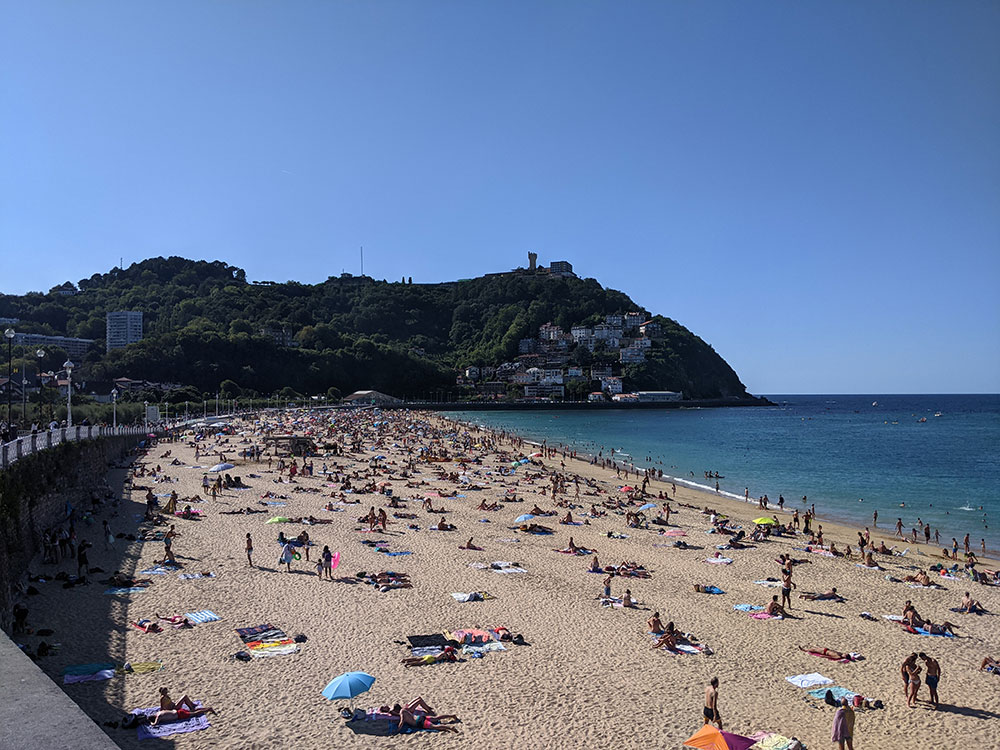 Ondarreta beach is located to the east of La Concha beach at the foot of Monte Igueldo.

The beach itself is the smallest in San Sebastian at 600m wide. It’s also the beach furthest out from the city centre. This is probably why it’s the least famous of all three beaches in Donostia.

However, sitting opposite Santa Clara Island, with the Miramar Palace behind, the beach is in a stunning area in San Sebastian. Visitors who make the little extra effort to get to Ondarreta will be glad they did so.

Due to its location, the beach is mainly used by the Antiguo locals and students (it’s the closest beach to the University).

But for tourists, it offers an alternative view of San Sebastian.

Given it’s quieter (both in terms of the number of people and the fact the beach is protected from the elements) makes it a great spot for families. You can bathe in the sea without being hit by the waves in La Zurriola. Or find a quiet spot without being bothered by people coming and going from La Concha.

That doesn’t mean there’s nothing going on. In fact, there’s quite a bit to get stuck into if you don’t just fancy sunbathing all day.

Whether you’re a water baby or not, there’s something worth giving a try.

Monte Igueldo protects the sea at Ondarreta beach. This makes it a great place to do some open water swimming.

First thing in the morning, you may even spot some keen donostiarras (people from San Sebastian) getting their morning workout in.

Ondarreta beach is also the preferred starting point for those wishing to swim to Santa Clara Island. Not only is it the shortest distance, but there are several floating platforms on the way which offer a well earned pit stop!

For kids who haven’t yet learnt to swim, during the summer months, there’s a small swimming pool installed on the beach where swimming lessons are offered.

The beach is probably the most family-friendly in San Sebastian. Mainly because the sea is calm.

However during more stormier days, when surfing on La Zurriola isn’t recommended, then Ondarreta beach usually turns into the place to be. Surfers flock from Gros down to Antiguo to make the most of the waves.

Some even make use of the promenade wall that leads up to El Piene del Viento. The water bounces off the wall creating bigger waves that the surfers can ride back to the bay. One for beginners not to try!

On normal days, Ondarreta is best suited for water sports such as canoeing, paddle boarding and kayaking.

Much like La Zurriola, the younger groups (usually students), bring a different vibe to the beach.

Students tend to make use of the space to set up volleyball courts, small football matches or keepy uppies and paddle board games.

It’s only really doable during low tide as the beach does extend somewhat towards the Pico del Loro – a small passage of rocks between La Concha beach and Ondarreta beach.

When the tide is low, it’s possible to walk between the two beaches. That means you can take a stroll all the way from the foot of Monte Igueldo to the town hall without leaving the sand.

Given the location, it’s hard to ignore what’s around you at Ondarreta beach.

Whilst you can venture to La Concha without leaving the sand, there’s plenty more to see if you’re willing to put your trainers on and walk a little further.

Start at El Peine del Viento, probably the most famous sculpture(s) in Donostia, and located just a stone’s throw from your sun towel. The sculpture is “alive” in that it changes with the weather. The choppier the sea the more impressive a visit to El Peine is.

Walking back from El Peine del Viento towards the beach, it’s hard not to admire the Ondarreta Gardens.

The gardens bring a burst of colour to the coast with symmetrical flower arrangements spanning its length. There are areas where you can sit and admire the trees, flowers and statues. It’s also a good spot to grab a bit of shade or read a book!

As you carry on to the end of the promenade, you’ll reach the steps that lead up towards Miramar Palace. A stunning building that was commissioned by the Spanish Royal Family and built in 1893.

The gardens of the palace circle the building giving you different views to admire it’s unique English style. It’s a historic location in San Sebastian and the gardens can be enjoyed by the public. They offer spectacular views of Santa Clara Island and La Concha Bay. It’s easy to see why the Royal picked this location!

The amenities at the beach are designed to make your visit as comfortable as possible.

All beaches in San Sebastian have lifeguards from the 15th June – 30th September. They are on watch from 10am to 8pm.

The council also operates a beach flag system to notify people when it’s unsafe to be on the beach.

The beach has ramps at the main access point as well as special services for the disabled.

During the summer months there is a small beach bar that serves cold drinks, coffee and snacks. Close to the beach, there are a number of cafes and restaurants including the Wimbledon bar at the Real Club de Tenis de San Sebastian.