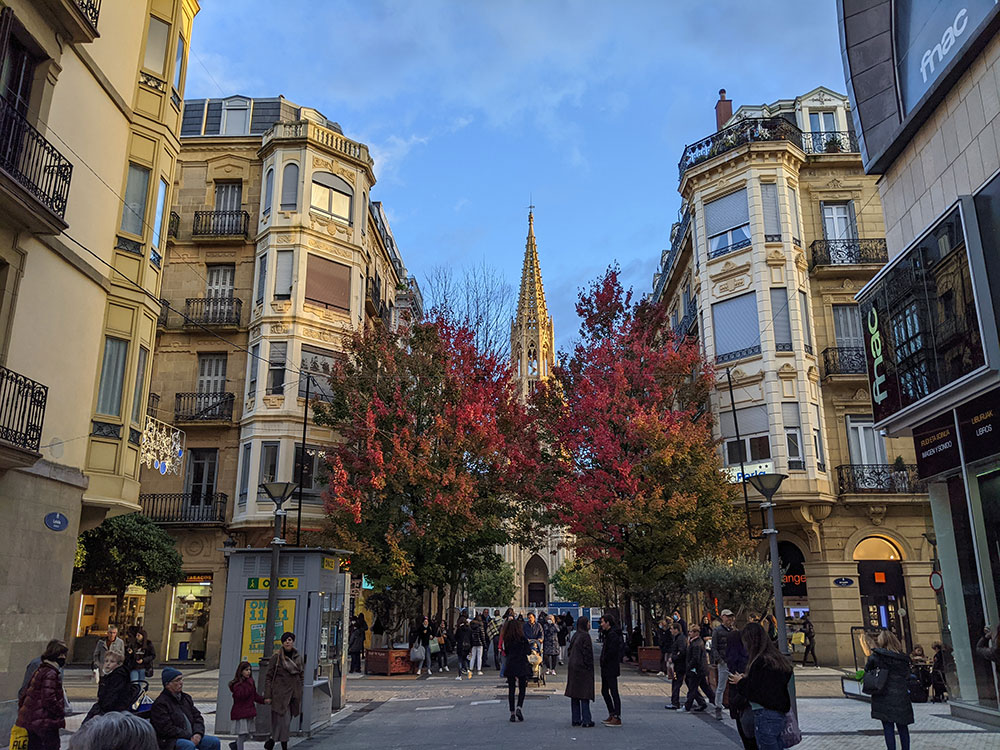 If you’re thinking of a trip to San Sebastian, there are a few things worth knowing about the city before you start planning.

But once you’re committed to making the trip over, the first thing you need to decide is when you’re going to come.

Each season and month has its own pros and cons. Whether it’s the weather or the events going on in the city, there’s plenty to consider.

But don’t worry, we’ve got you covered. In this guide, we’ll run you through the process to determine when the best time is to visit Donostia for you.

Picking the best time of year to visit Donostia requires weighing up the pros and cons of each month. However there are some quick things worth knowing below.

Probably the key deciding factor in when to visit San Sebastian for most is the weather.

I’m not going to lie, the Basque Country isn’t like the south of Spain. The climate is a lot cooler here than the likes of the Costa del Sol and the Costa Brava.

That being said, in the height of summer when the rest of Spain can be suffering from heat waves, the north coast of Spain is usually hovering around a pleasant 25 degrees.

But it can also rain. A lot.

The beautiful green landscape isn’t here by mistake. It requires a lot of rainfall, and we receive it. The good thing is, you can usually plan to visit in months when the rainfall is typically less.

This does come with one caveat. The weather in the Basque Country is rather unpredictable. If the weather is an important factor for you, hedge your bets by picking a time of year with less rainfall, but whenever you come, pack a raincoat just in case.

2. Events in the city

San Sebastian is a vibrant city with a lot goin on. The Basque Country also has a lot of traditions, so it feels like there’s always some sort of festival happening in the streets.

Before deciding when to come, check the events that are going on (see our guide by month below). If you can time your trip with one of the numerous events that peak your interest, then it’s win-win.

Be aware though. Some of the popular events like Semana Grande can lead to accommodation being at a premium.

Donsotia is a popular tourist destination. There’s also a community of people that spend the summers here. With that comes a high demand for accommodation during the summer months.

The city is already one of the most expensive cities in Spain, so if you’re expecting prices such as in Benidorm and other parts of Spain, then you’re not going to find them here.

If you’re coming in the height of summer, be prepared to pay top dollar for accommodation. It also depends what you’re comparing the prices to. The city’s accommodation is probably more comparable to prices in the UK and US.

The seasons in San Sebastian

The section below gives you an idea of the weather in San Sebastian during each of the seasons.

One of the best ways to help you decide what time of year to come is to run through the pros and cons of each month. In the section below, we do just that!

If the weather is your deciding factor, then perhaps visiting San Sebastian in January isn’t for you. The temperature hovers around 12 degrees, with statistically the most days of rain within any month.

Whilst the days start to get a little longer and the temperature starts to warm up, February is still in winter and nothing can be taken for granted. The average high is around 13 degrees, with lows of 7 degrees.

March officially welcomes the start of spring and the signs of better weather. It’s not perfect, and certainly still not warm, but you can be blessed with a surprise weekend of really nice weather. Temperatures are still around highs of 14 degrees and lows of 8 degrees.

En Abril, aguas mil (In April, it rains a lot) – or so saying goes. Whilst the temperature warms up to highs of 16 degrees, there’s statistically more rain in April than February and March.

May is a great time to visit San Sebastian. The days are longer and warmer and the city isn’t as busy as it gets in the height of the summer season.

June officially marks the start of summer and with that the peak tourist season starts. It’s also the start of the really good weather in San Sebastian with highs of 21 degrees and lows of 15.

In July, summer is in full flow in San Sebastian. Lots of sporting and cultural events start to take place making it a good time to come and visit too.

The busiest month in San Sebastian. It’s the best time of year for good weather, but expect to pay a premium for hotels.

Alongside May, September is one of the best months to visit San Sebastian in my opinion. The kids have gone back to school, so the city isn’t quite as crowded and there’s still plenty going on to keep you occupied.

October is really a month of two halves for me in Donostia. At the start of the month, you can still expect some decent weather and longer days, but towards the end of the month, closer to November the colder weather comes in and the days get shorter.

It’s not officially winter, but it’s starting to feel like it. The temperature drops a whole 5 degrees on average from October to November with highs around 15 degrees and lows of 10.

December sees the start of the Christmas festivities in Donostia. Being on the coast also means that the temperature doesn’t drop quite as much as some other European cities, with fairly mild weather.