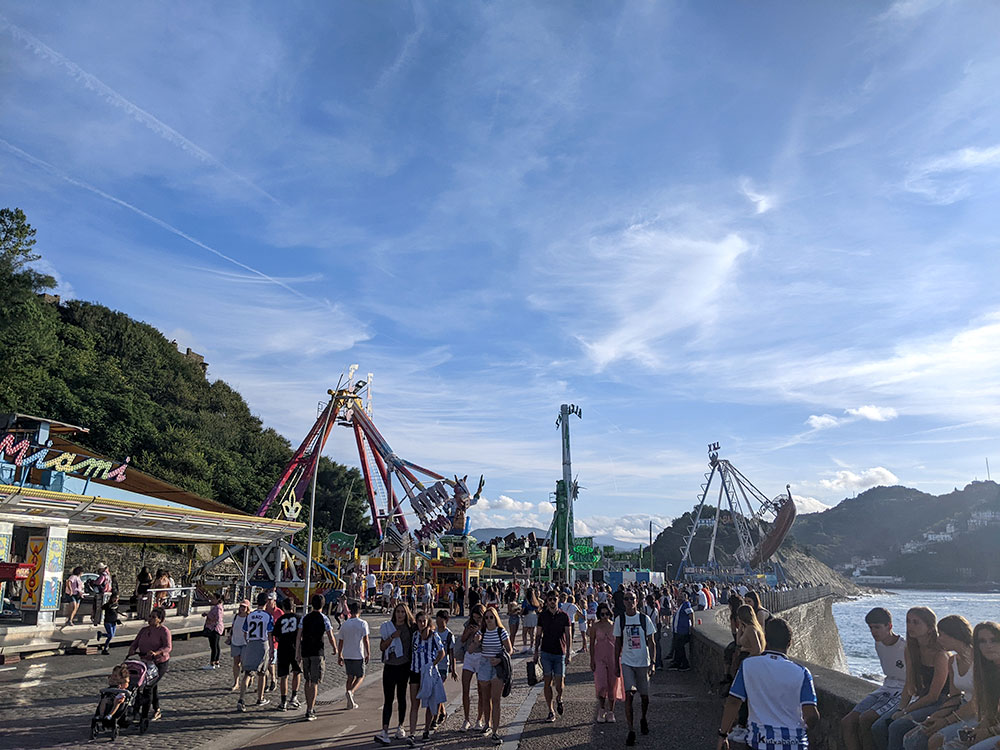 Semana Grande, or Great Week in English, is a week-long festival that is celebrated in San Sebastian each year in August.

It takes place each year on the week that marks the Virgin’s Day (15th August).

The festival initially started in the days when Queen Isabella II used to pass her summers in Donostia. The San Sebastian council decided to mark the week with a series of bull fights as a way of entertaining the city’s summer guests.

Since then, the festival has grown into a week-long party with other events taking place in the city, including sports events, firework displays, gastronomic events, attractions, farmers markets and much more.

There’s a general party atmosphere in Donostia this week. Most Donostiarras (people from San Sebastian) and tourists in the city are on holiday, so there’s a relaxed atmosphere and people are generally looking for a good time.

It’s a great family event too, with things going on for all ages. There’s a temporary amusement park on Paseo Nuevo all week with rides, games and other things to keep children (and some adults) occupied.

Being in the middle of August, the chances are the weather will be kind too, which makes it a great time of the year to come and visit San Sebastian.

How is Semana Grande celebrated?

Semana Grande kicks off with cannons being fired in the Alderdi-Eder gardens outside the town hall at 7pm on the first day of the festival.

This signals the start of Semana Grande which is celebrated with a number of events.

Perhaps the most impressive part of Semana Grande is the International Fireworks competition.

The competition features some of the best firework manufacturers in the world as they show off their best displays, lighting up the sky.

A different company puts on a display each night which can last up to 30 minutes! You can see the fireworks from all parts of the city, but perhaps the most impressive view is from La Concha beach itself or Paseo de La Concha. It’s worth getting there early to get a good spot!

At the end of the week a winner is crowned with public votes and a jury making the final decision.

The competitions aren’t only reserved for the firework companies. Many elite sportsmen and women travel to San Sebastian during Semana Grande to compete in a variety of sporting events.

One of the more traditional events is the Paseo Nuevo Swim, that’s been going since the 1930’s. Swimmers enter the water at La Zurriola beach and race around Monte Urgull to finish at La Concha beach.

There are also “herri-kirolak” (traditional Basque rural sports) exhibitions throughout the city. Harrijasotzaile (stone lifting) is probably the most famous of all the herri-kirolak and makes quite a spectacle with stones weighing between 100kg – 200kg (and above) being lifted off the ground.

Outside of that, there are beach volleyball tournaments, horse riding competitions and other sporting events that pop up across the city.

All the events can be attended, and for some like the Paseo Nuevo swim, all that’s required is to get a good spot on the street or on one of the viewpoints on Monte Igueldo.

March of the Cabezudos

One for the kids, the march of the Cabezudos is a parade of giant characters that reach over several metres in height.

If you do go and watch them, be careful though. They carry inflated sacks of pigskin that they use to spank passers by!

It wouldn’t be a festival in San Sebastian without food being involved. After all, it’s one of the things San Sebastian is famous for.

Throughout the week, there are food trucks and farmers markets in various points of the city, filling the street with flavour and moreish smells. There are also food contests where competitors battle it out to make the best version of some traditional dishes.

Outside of the street food, Semana Grande is generally celebrated (like most things in the Basque Country) by people getting together and eating. Whether that’s in big group meals in one of the sociedades (gastronomic societies) or working through the pintxo bars in the Parte Vieja (Old Town).

Every year on one of the days of Semana Grande, a pintxo-pote evening is also held in Plaza Cataluña in Gros where you can get a pintxo and a drink for a discounted price.

All together, it makes Semana Grande one of the biggest events on the calendar in San Sebastian and one of the most exciting weeks in the city.