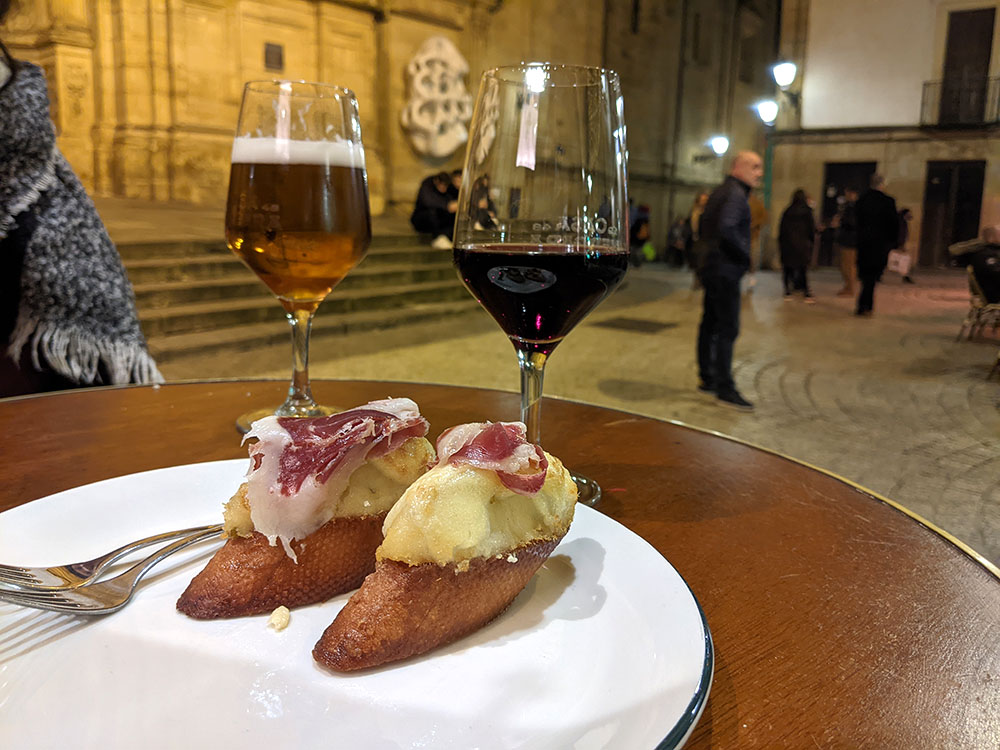 Alongside the beaches, the surf, city centre architecture and cultural events, one of the things San Sebastian is most famous for is the food! And in particular the pintxos.

Pintxos were born in the Basque Country. They are a small, appetiser sized portion of food that are usually served at bars. They differ from the traditional Spanish tapa in that they are ordered separately to your drink (whereas tapas are generally served for free when you order a drink).

But a newer wave of popularity has been taking off over the past decade or so which is Pintxo-pote.

Pintxo-pote is the Basque Country’s equivalent of a Happy Hour. But it’s better, because instead of just getting a cheaper drink, you get a bit of food too!

The principle remains the same.

For a couple of hours, usually in the early evening, bars that participate in pintxo-pote will offer a drink and pintxo for a reduced price of the usual cost. In most instances this will be on a weekday (usually a Thursday), anywhere between 7pm and 10pm, but this depends on the place with no “official” set day or time.

The idea is that the bars benefit as they get an increase in footfall during what would otherwise be a quieter night, and customers benefit in that they get a social drink and some delicious food for a decent price.

When it comes to the drink, there’s usually a choice, but it’s typically a beer (caña), a half glass of beer (zurito), a small glass of wine or a glass of cider (Basque cider of course).

In terms of the food, this will depend on the city, area and the bar, but generally consists of a small pintxo such as:

Again there’s no real set food or drink for pintxo-pote, but that’s the beauty of it in that you can pick and choose what you want.

As the portions (both food and drink) are usually quite small, most people who go out for pintxo-pote will usually have two or three pintxos and drinks. It’s not uncommon for people to move around too and try some of the different pintxos on offer at different bars.

Where can you go for Pintxo-pote in San Sebastian?

Pintxo-pote is pretty much exclusive to the Basque Country. It’s usually found in the Basque capitals such as Bilbao, San Sebastian and Vitoria-Gasteiz, although you can also find in it some of the smaller towns too.

In San Sebastian specifically, whilst the Old Town (Parte Vieja) is the best place for pintxo, there are less bars that offer pintxo-pote.

For that reason, the best areas for pintxo-pote in Donostia are actually outside of the Old Town, and tend to be in Amara and Gros.

If you’re interested in trying some pintxo-pote then you can check out this list of bars that offer it in San Sebastian at the bottom of this article here.