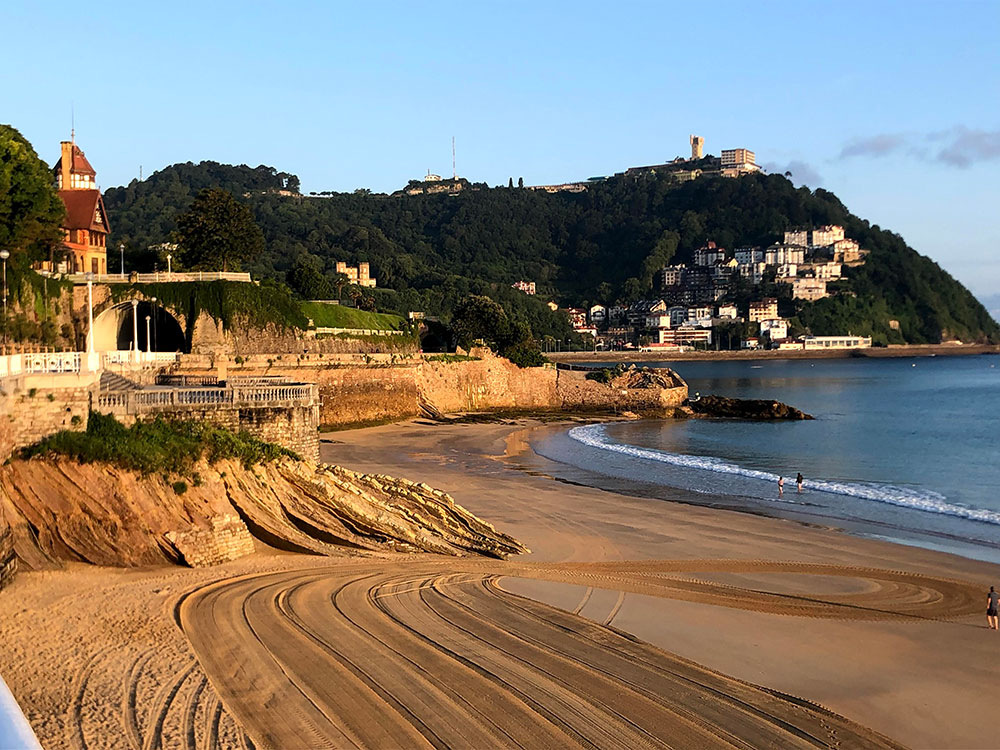 If you’re thinking about visiting San Sebastian, there’s some things you should know about the Basque city before doing so.

We’ve taken some of the most frequently asked questions and answered them all in one place so you can head to Donostia with peace of mind.

1. What region of Spain is San Sebastian?

Donostia-San Sebastian is in the Basque Country in the North of Spain.

It’s the capital of Gipuzkoa (a province within the Basque Country) and is a seaside city, located on Spain’s northern coastline on the Bay of Biscay.

The largest closest city to San Sebastian is Bilbao, the capital of Bizkaia, a province that borders Gipuzkoa to the west.

The Alava province is to the south. To the east is the autonomous community of Navarra (the capital is Pamplona) and the French border.

2. How far is San Sebastian from the French border?

The French border is just 21km from San Sebastian, or 25 minutes by car.

The proximity of France actually means that the closest International airport to San Sebastian is in Biarritz.

The town of Irún borders France on the Spanish side and Hendaye is the first town on the French side. The two countries actually share an island (Isla de los Faisanes) located in the river between the two towns. It belongs to each country for 6 months of the year!

It’s easy to cross the Spanish-French border by car, walking or by train. There is usually a border control on the French side, but they don’t stop many cars or ask for any documents to cross into the country.

3. Why is San Sebastian called Donostia?

Donostia is the Basque name of San Sebastian (the official name of the city in Spanish). Both names are official in their respective languages.

The origins of the Basque language is largely a mystery. However, it is believed that the “don” in Donostia comes from “domine”, the latin for “saint”. The second half of Donostia is believed to be an evolution of the shortened saint name for the city – Don Sebastiane became Donostia.

4. Is San Sebastian worth visiting?

San Sebastian is 100% worth visiting!

Donostia has it all. A standard of food you’d struggle to find anywhere else in Europe. Amazing beaches in the city centre. Surf. Culture. Mountainous regions dotted on the outskirts of the city centre. What’s not to love?

The north of Spain is overlooked by a lot of the world. Most tourists that come to Spain tend to visit the south of the country.

However there aren’t many places that have as much to offer as San Sebastian, so making a trip to the north is well worth it.

5. Is San Sebastian worth visiting in winter?

Look, I’m not going to lie to you. The weather in San Sebastian, and the Basque Country in general, can be a bit hit and miss. It can rain – a lot!

But that’s part of what adds to its charm and gives the area its spectacular green landscape.

That being said, the winters in San Sebastian are fairly mild. Being a coastal city, it rarely gets very cold. That makes it a good place to visit in winter.

If you think about why people visit San Sebastian. The food, the culture, the stunning architecture and scenery, then a bit of cooler weather doesn’t impact your visit.

That being said, Donostia is a completely different city in the summer when the weather is a little more guaranteed. There’s more hope that you can enjoy the beaches and outside areas of the city. If you can choose, choose summer. If that’s not possible, it’s still worth coming in winter.

6. Does it rain a lot in San Sebastian?

In a word, yes. It can rain a lot in San Sebastian.

There’s certainly more rainfall here than what you’d typically associate with the rest of Spain. To put it into context, there’s 1,500mm of rain on average each year in Donostia. Whereas southern areas of Spain will typically only receive 500mm.

Most of the rain (total volume and rain days) unsurprisingly falls in the winter. The summers are drier with fewer days of rain.

You can find the average rainfall by month here. Be warned though, whilst these are averages, the Basque Country climate is dynamic and largely unpredictable.

The study that found this though looks at things such as property prices, taxes and public transport costs alongside general entertainment. Most of these won’t be a concern for the average tourist.

It also depends where you’re comparing the cost to. Compared to the rest of Spain, yes, you’ll typically pay more for a weekend away. But for people from the UK, US and more expensive countries, San Sebastian will still seem great value for money.

Either way, you can still visit Donostia on a budget. The best place to start would be looking at our best value hotels or hostels in the city.

San Sebastian is a very safe city for both tourists and residents. Crime rates in Donostia are very low.

When on the beach for example, I have no issues leaving my belongings by my towel whilst going for a dip in the sea or a quick stroll along the beach.

Like in any city in the world though, it’s worth paying attention to your valuables when you’re out and about.

9. Do they speak English in San Sebastian?

The two official languages in San Sebastian are Basque and Spanish. Whilst almost everyone will speak Spanish, Basque is spoken by around a quarter of the population.

English is spoken too. It’s taught from a young age in most schools in the Basque Country, so most people have a good grasp of the language. However, it’s less common compared to the south of Spain and other more popular tourist destinations.

In the bars, restaurants and hotels in San Sebastian most of the staff will speak some English. Certainly enough that you’ll be able to get by in most situations with no problem.

10. Can you drink water in San Sebastian?

You can drink the tap water in San Sebastian. In fact, it’s some of the highest quality tap water in Spain according to the Organisation of Consumers and Users (OCU).