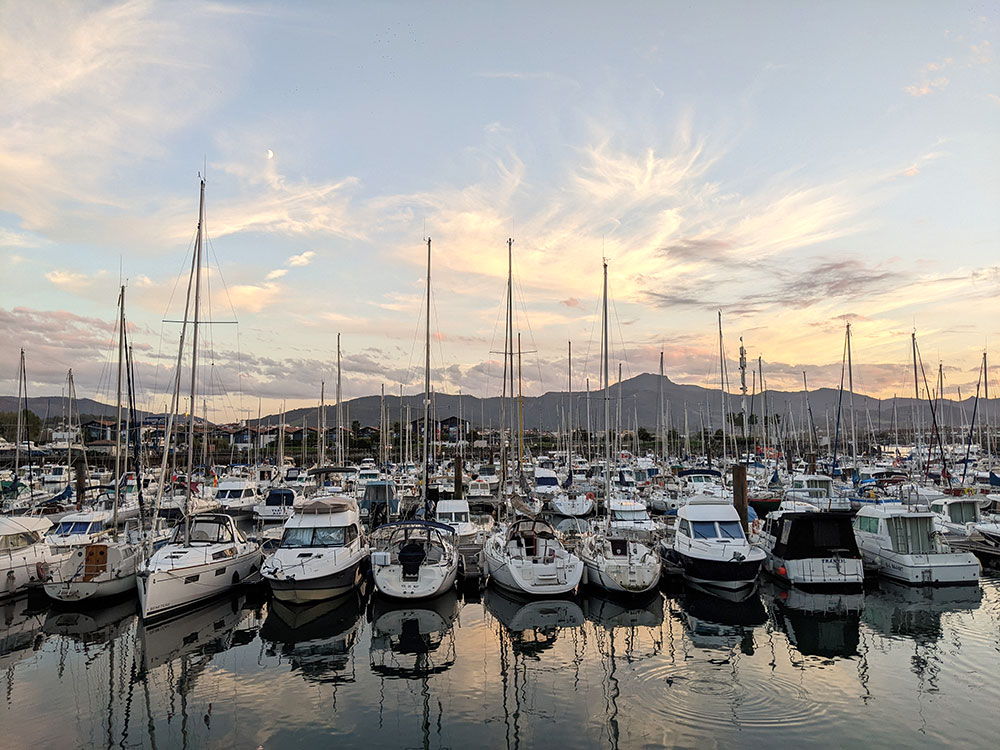 Hendaye is a small French coastal town on the Spanish-French border.

Despite being in another country completely (it still forms part of the French Basque Country), it’s only 30 minutes from the centre of San Sebastian.

The strategic location of the Hendaye has meant its bared witness to many things over its history, which makes it an interesting place to visit, with plenty to discover.

In this article we’ll run through the reasons why Hendaye makes a great day trip from San Sebastian alongside the top things to do.

Things to do in Hendaye

There’s plenty to get stuck into in Hendaye, whether you’re planning on a flying visit or staying here for a few days.

Arguably the star attraction of Hendaye these days, Ondarraitz beach is not to be missed on a trip to the town.

Mind you, it’ll be difficult given that the beach reaches over 3 km in length!

But it’s not just the space, or the golden sandy beach that makes this popular with tourists (and in particular large groups and families).

The beach is spectacularly framed by the beautiful Spanish town of Hondarribia and the River Bidasoa on one side, and cliffs and the Les Deux Jumeaux (the twin rocks) on the other side.

The Boulevard de la Mer is the name of the promenade in Hendaye.

It stretches most of the beach front, and offers a pleasant 2 km stroll with stunning views over Ondarraitz Beach and beyond.

Along the way, there’s plenty to look at on the other side of the promenade too. The Boulevard de la Mer is home to some of the grandest neo-basque style houses which you can admire as you stroll along.

Built in 1884, it previously served Hendaye as the main casino. These days it’s more of a mini shopping centre with restaurants, ice cream parlours and surf equipment hire. But it still remains one of the most beautiful buildings in the town, with its unique Arabic influenced design.

Hendaye is another seaside town in the area to add to the list that is great for surfing!

Much like Zarautz, the beach (and sea) here has ample room for everyone to enjoy a bit of surfing. It makes it perfect for all levels of surfers.

There are plenty of spots where more experienced surfers can enjoy bigger waves, whilst zones for beginners or those who need a little more clearance to catch some waves.

There are also plenty of surf schools or tutors willing to give private one to one lessons if you’re keen to learn.

Taking a break from the beach, but moving further down the coastline, our next recommendation is a walk along the Chemin de la Baie (Bay Path).

Starting from the Boulevard de la Mer, you can keep heading west, following along the water for over 14 km until you reach the bridge back to Spain and the town of Irún.

It’s a very pretty walk where you can admire the beautiful backdrop of Hondarribia across the calming Bidasoa River.

Along the way there’s plenty to see as you pass the port of Hendaye and the Bay of Txingudi. There are even some reminiscences of Hendaye’s darker history, with ruins from previous defence walls, including the occasional canon!

If you have a bike, it’s a great cycle too. There’s a bidegorri (cycle lane) along most of the flat route which even continues from Irún into Hondarribia.

The Old Town in Hendaye is located away from the beach, between the coast and the train station.

We mentioned Hendaye’s role in previous conflicts between Spain and France. Well, the town suffered hefty damage in 1793 when Spanish soldiers pretty much destroyed the town.

But despite the loss, the town rebuilt itself and it actually gave birth to the neo-basque style architecture that now makes this town so special.

Today, the Old Town of Hendaye is lined with beautiful houses with a beautifully quiet atmosphere from the terraces of the many bars and restaurants. It makes it the perfect place to grab a bite to eat or a refreshing drink stop.

If you continue your way to Hendaye Train Station, you’ll visit a place that played a role in history. The station was a meeting point for Franco (the Spanish dictator) and Adolf Hitler as they discussed a possible alliance of forces in the outbreak of World War II.

OK, so we described Hendaye Casino as perhaps the most iconic building in Hendaye, but we’ll have to take that back. That award definitely goes to the Château Abbadia!

This extraordinary neo-gothic style château dates back to 1864 and was the creation of Antoine d’Abbadie.

Antoine was an eccentric explorer, geographer, with a passion for different cultures and astrology. The spectacular building is certainly inspired by different castles from around the world.

But perhaps more intriguing is the interior. It reflects his eccentric personality, with influence from Africa where he spent a part of his life. It even has its own observatory.

It’s certainly worth paying to get in and check out the interior of the château. The grounds also contain a beautiful coastal walk which hides some of the best views in Hendaye.

How to get the Hendaye

Hendaye is the first town on the French side of the French-Spanish border. It’s easily reachable by foot, car and public transport (even if you’re coming from Spain).

Whilst there are no set checks crossing the border, it’s worth bringing some ID as the French police will conduct random checks and won’t allow you to enter France without it.

Hendaye is located just off the A63 in France. If you’re coming from north of Hendaye, from places such as Bordeaux (2 hours), then it’s easily accessible by this motorway.

The A63 turns into the AP-8 once you hit Spain which is the road you’ll need to take if travelling from San Sebastian.

Be warned, the AP-8 is a toll road. If you want to avoid the tolls, you can reach Hendaye via. the GI-636 which will take a couple of minutes extra but is toll-free.

The Euskotren, or “Topo” leaves San Sebatian (Amara Station) for Hendaye every 30 minutes. The journey takes just over half an hour and will leave you at Hendaye Station.

If you’re travelling from further afield in Spain, then your best bet is to get to Irún Train Station and take the connecting topo from the town.

Frome Hendaye, there are also wider connections to the rest of France, including the high speed train (TGV) to Paris.

There are also local French train lines that will take you to St Jean de Luz (15 mins), Biarritz (25 mins) and Bayonne (35 mins).

If you want to cover off both Hondarribia and Hendaye in one day, then there’s a great little ferry line that will take you across the border between the two towns.

It leaves Hondarribia every 15 minutes and takes around 7 minutes to reach Hendaye. There’s even space for bicycles and dogs.

It’s an easy and quick way to get to Henday with the added bonus of some fantastic views of Hondarribia, Hendaye and Irún. You can find out more information here.