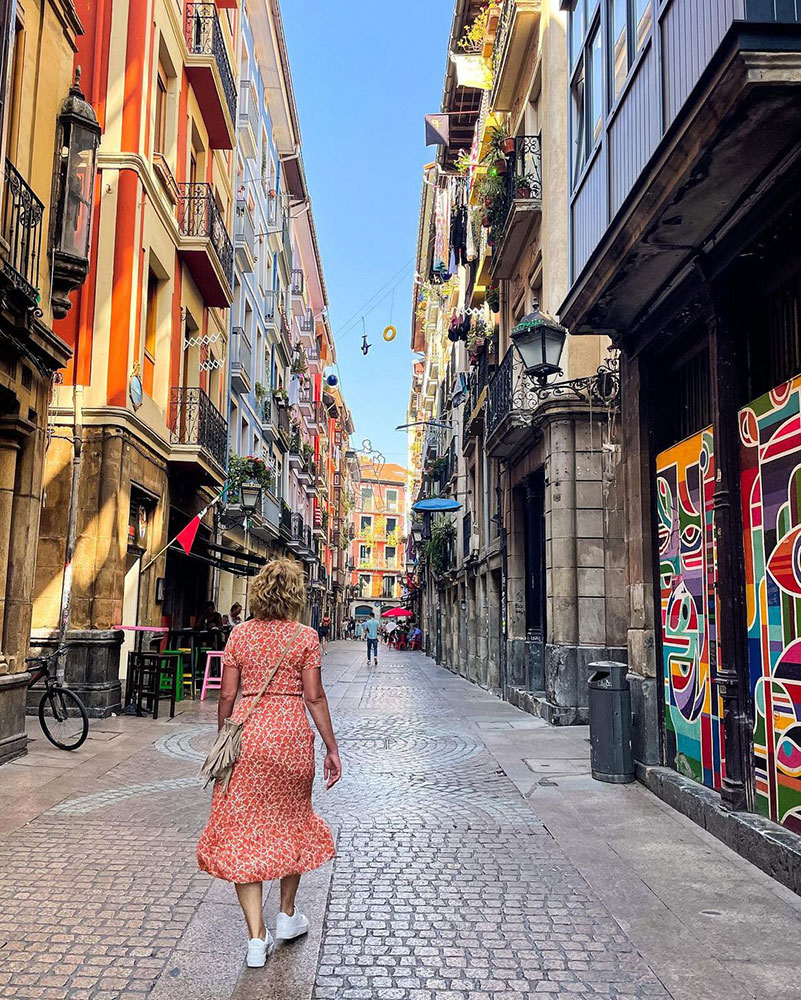 Bilbao is a city famous for its industrial past, art, architecture, food and football.

Whether you’re the type of person who loves a museum, someone who wants to try all the local cuisine, or you simply prefer to watch the world go by, you’re sure to find something in Bilbao.

After years of regular day trips from San Sebastian, we’ve sought to experience all the best the city has to offer.

From that, we’ve pulled together a list of our favourite things to do in Bilbao to help you get the most out of your visit.

1. Discover your artistic side at the Guggenheim Museum

The Guggenheim Museum in 1997 was the cornerstone for radical change in Bilbao. It’d be fair to say that it almost single handedly put Bilbao on the map.

The introduction of the Guggenheim to an once dark and abandoned industrial corner of the city led to rejuvenation in not just the area, but the city as a whole. This led it to become the popular tourist destination it is today.

Since opening it’s been visited by over a million people each year and is one of the most renowned contemporary art museums in the world.

The building itself has had a large part that! Even if contemporary art isn’t quite your cup of tea, visiting the museum from the outside is a must on a trip to Bilbao.

Mind you, it’d be difficult to miss given it’s a large boat-shaped structure made from titanium, limestone, and glass. Over the years it has become the most recogniseable icon of Bilbao.

2. Wander around the Seven Streets of the Casco Viejo

The Casco Viejo (Old Quarter) in Bilbao goes by many names. It’s known as “Zazpikaleak” in Basque, or “Siete Calles” in Spanish – both translate to the “Seven Streets”.

Whatever you want to call it, it all refers to the same nucleus of streets in Ibaiondo district of Bilbao.

Founded over 700 years ago, the Old Quarter was the historical centre of commerce in the city. Today it’s transformed into a pedestrianised area dedicated to hospitality and shopping.

With a mixture of some of the best shops, coupled with some of the tastiest restaurants and pintxo bars and some of the most historic buildings and monuments, spending some time in the Casco Viejo on a trip to Bilbao is a must.

3. Get your foodie on at the La Ribera Market

As part of your trip to the Casco Viejo, you’re going to want to take a pit stop for food. And there’s no better place to do so than in the La Ribera Market.

The Mercado de la Ribera is not only the largest covered market in Europe, but it also entered the Guinness Book of Records recognised as the most comprehensive food market in the world!

Local merchants have traded here everyday since 1929, making It one of the best places to try some of the local cuisine whilst in the Basque Country.

Aside from the delicious food, the building itself is curious enough to make the trip alone. Set on the River banks, it’s shaped almost like a ship docked at port.

In the late 19th Century, Bilbao was beginning to outgrow the narrow streets of the Casco Viejo and sought expansion to accommodate the growing population.

And so, the city expanded to the other side of the river estuary into the Abando area, giving birth to the Ensanche neighbourhood and modern Bilbao.

Today, it’s a centre of commerce, finance and the most cosmopolitan area of the city.

5. Take some time out at one of Bilbao’s Beaches

When you think of Bilbao, sandy beaches may not be the first thing that springs to mind! And we wouldn’t blame you.

However, Bilbao is located just 10 miles from the Bay of Biscay coast!

And it’s coastline that’s packed with stunning rock formations, cliffs, amazing surfing conditions and impressive beaches. Each year thousands of tourists come from all over the world to enjoy this amazing natural landscape.

Best of all, a number of the beaches near Bilbao are easily accessible by public transport from the centre.

Whether you want to try your hand at surfing, discover some of the incredible panoramic views from the beach side cliffs, or simply sit back and relax, you’re sure to find a beach that is perfect for you.

Whilst getting lost in the Seven Streets of the Old Quarter is a nice way to spend your time in Bilbao, I always feel understanding the history of a city always gives the spaces a deeper meaning.

Taking a free walking tour in Bilbao is a great way to get to understand a little bit more about this fascinating city and the rapid changes it has undergone over the years.

From tours of the Old Quarter to stories of Modern Bilbao, there’s plenty of tours available that’ll satisfy your curiosities.

Visiting one of Bilbao’s museums should be on the itinerary for anyone visiting the city.

And whilst the Museo de Bellas Artes (Museum of Fine Arts) may not have the worldwide fame of the Guggenheim, but it does have over 100 years of history having been founded in 1908.

The museum has gathered a large collection of paintings and sculptures spanning from as early as the 12th century up to more modern days. Today, it has developed to become one of the richest Spanish museums outside of Madrid.

It features works from the likes of Goya, sculptures from names such as Chillida and more contemporary pieces by the likes of Barceló.

It’s open all week, except Tuesdays, and even offers free guided tours each Sunday at noon.

Sometimes when you’re on a city break, you just want some time out from all the museums, food and drink.

Well, the banks of the River Nervion is the perfect place in that case!

The river runs up from the Bay of Biscay before meandering its way through Bilbao. So, wherever you are in the city, you’re never too far from the water.

The banks of the river have some of the most peaceful green spaces. Whether you want to sit down and admire some of the views or stroll up and down with an ice cream, it’s the perfect spot for a time out.

9. Go on a pintxo bar crawl

You can’t make the trip to the Basque Country without trying some of the famous pintxos.

Pintxos are the Basque Country’s version of tapas. They are small appetiser-sized portions of food, served in the tavernas (bars). And they are absolutely delicious!

San Sebastian is famous for its pintxo culture, but some of the best pintxo bars are also found in Bilbao.

Each bar usually has a number of specialities. So, to try the best of the best (and make sure you don’t miss out on any), it’s worth moving from bar to bar, trying some of the favourites in each.

The Puente de Vizcaya has been standing in the mouth of the Ibaizabal estuary since 1893.

It’s a 45 metre high bridge, spanning 160 metres across the water. But what makes this bridge so special is the way you travel across the river.

Instead of walking across the bridge, people and traffic are carried across the river in a suspended gondola.

It was designed to avoid the passing ships below and is a magnificent piece of innovative design and engineering by Basque architect, Alberto de Palacio.

It has been celebrated as one of the best examples of hanging transporters having been declared a UNESCO World Heritage site in 2006.

11. Shop until you drop on Gran Via

One of the most famous spots in Ensanche Neighbourhood, Gran Vía was the street chosen by the bourgeoisie to build their mansions, shops and banks.

Alongside being home to some of the most beautiful buildings in the city, it’s also where all the city’s department stores and luxury fashion brands are located.

It’s an area brimming with beautiful walkways, hidden gardens and fountains. And if the shopping gets a little too much, then you can even kick back in one of the coffee shops or restaurants located on the side streets off the main avenue.