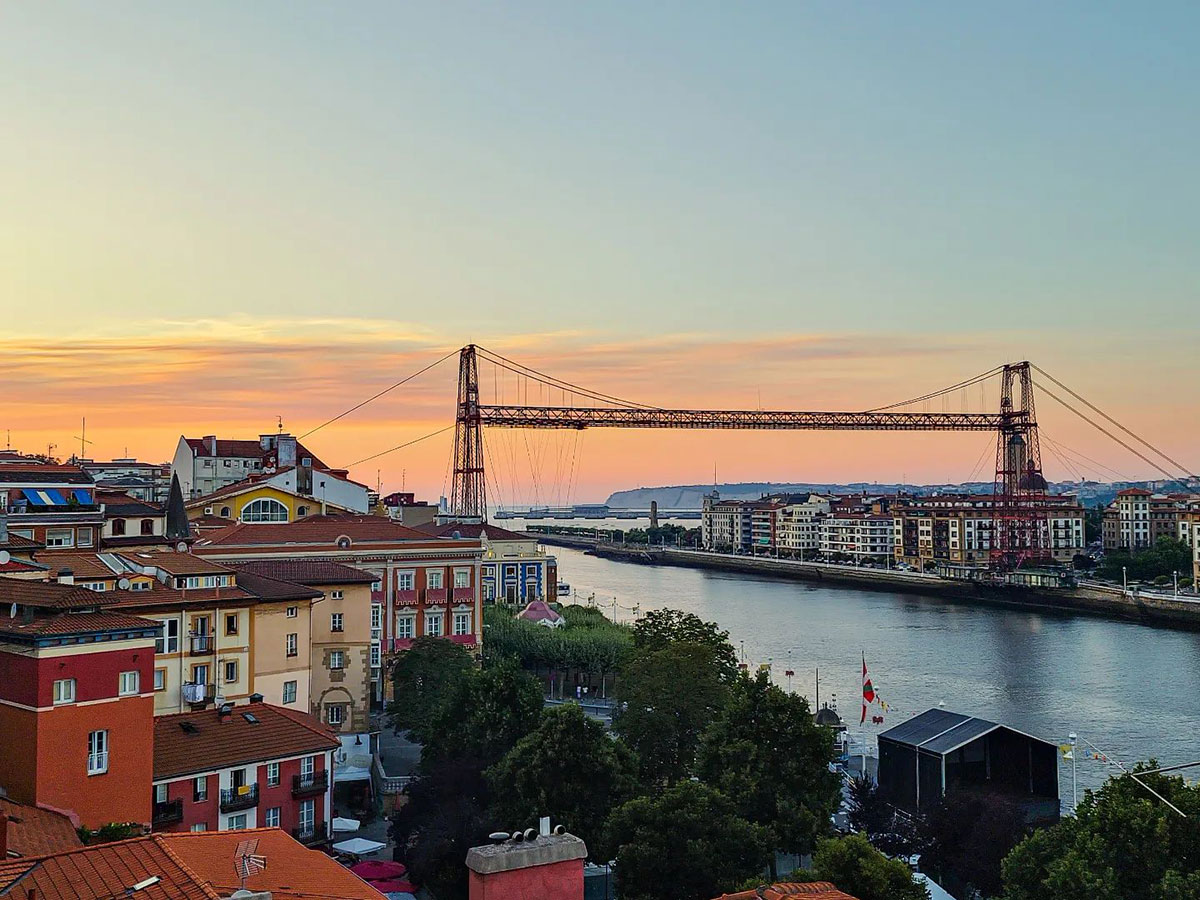 The Vizcaya Bridge in Bilbao, or Puente Colgante (Hanging Bridge in Spanish) as it’s popularly known, is an impressive structure well worth a visit on a trip to the city.

Standing high above the estuary of the River Nervión, the bridge is one of the Basque Country’s most renowned icons.

In this article, we’ll run through what makes this Bilbao bridge so special and how you can visit.

Things to know about the Vizcaya Bridge in Bilbao

Visiting the Vizcaya Bridge is one of the top things to do in Bilbao.

If you’re unsure what to expect, read on to find out why this incredible engineering structure is so popular.

1. It was the first transporter bridge in the world

The Vizcaya bridge is popularly known as the world’s first transport bridge.

But what makes the bridge unique is the way traffic crosses it.

Vehicles and foot passengers are transported in a suspended gondola, measuring 25 metres long, travelling horizontally across the rails.

The bridge was innovatively designed by Basque architect, Alberto de Palacio. It was built to connect the two areas whilst allowing the passing of the ships below through to the port of Bilbao, which was important for trade.

Completed in 1893, it recently celebrated its 125th anniversary. And equally impressive, it has remained in service since its inauguration.

Whilst today there are other similar transporter bridges in the world, the Vizcaya bridge at its opening was an innovative engineering feat.

At the time it was recognised as one of the most outstanding iron architectural constructions of the industrial revolution. The bridge permitted the passing of ships without having to raise or lower the bridge, something that was unique.

Thanks to its technological advancement, and the fact the bridge pioneered similar constructions, in 2006 the bridge received the recognition it deserved when it was included in UNESCO’s World Heritage List.

It’s the only monument in the Basque Country on the list and the only Spanish feature in UNESCOs Industrial Heritage category.

3. There are three ways of enjoying the bridge

The most popular way to visit the bridge is to cross it as it was designed in the gondola.

The carriage is 25 metres long (enough to hold a decent number of passengers and vehicles). Spoiler alert. It’s not actually the original gondola. It’s actually the fifth edition!

If you’re looking for a more impressive view (and not afraid of heights), then I’d recommend the walkway.

Shooting up to 50 metres in the panoramic lift, the pedestrian walkway awaits you with stunning views of the mouth of the River Nervión, Bilbao port and a backdrop of mountains

Your final option is to take in the bridge from down below. Gasolinos (boats) are another form of regular transportation between the two areas.

You can take one of them to make the journey across the river, whilst also getting a close up view of the bridge. The pick up point is 100m from the bridge and costs €0.40.

Full details of opening hours and up to date pricing of the gondola and walkway can be viewed here.

How to get to the Vizcaya Bridge

The Vizcaya Bridge is located in Las Arenas, Getxo.

The easiest way to get to the bridge from the centre of Bilbao is by metro. The closest stop is Areeta. The journey will take around 25 minutes.

If you’re driving, there is paid on-street parking close by to the bridge.

Things to do nearby the Vizcaya Bridge

Given it’s a half an hour’s journey from the centre of Bilbao, it’s worth taking advantage by visiting some of the other attractions nearby.

If you’re looking for a quick pit stop after visiting the beach, then Las Arenas beach is the perfect place to stop by.

If you’re looking for somewhere to kick back and relax a little longer, then I recommend making the extra effort to reach the Ereaga beach.

It’s one of the nicest beaches in Bilbao, (much bigger than Las Arenas beach) with a couple of nice restaurants nearby if you fancy a bit to eat too.

Getxo has a stunning coastline and at the Vizcaya Bridge you’re already halfway there.

If the weather’s nice, then a walk around the beautiful Getxo cliffs is a great way to spend the afternoon. You can find out more about the walk here.