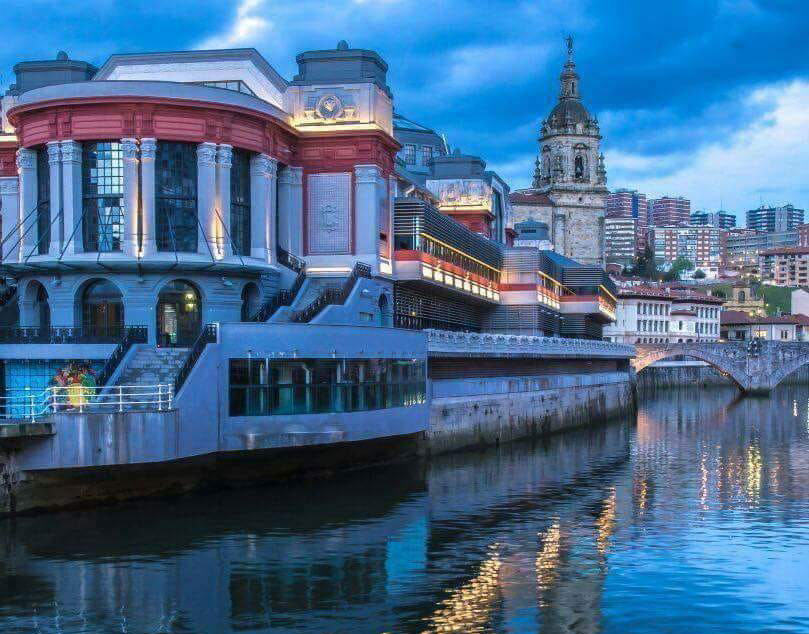 The Casco Viejo (Old Quarter) in Bilbao goes by many names. It’s referred to “Zazpikaleak” in Basque, or “Siete Calles” in Spanish which both translate to the “Seven Streets”. It’s also known as the Medieval Quarter or Old Town.

Whatever you want to call it, they all refer to the same nucleus of streets in the Ibaiondo district of Bilbao.

The Casco Viejo is the historical centre of the city, founded over 700 years ago. It emerged as a centre of commerce with three streets that were contained by surrounding walls.

Over time, the need for expansion led to the walls being taken down and an additional four streets being added, hence the “Seven Streets” name that was later adopted.

Today, it’s a pedestrianised area dedicated to hospitality and shopping. There’s a real mixture of bars, restaurants, traditional shops and historical sites that make it one of the top things to do in Bilbao.

In this article, we’ll run through the best of what to see and do!

Things to do in the Casco Viejo of Bilbao

There’s a lot packed into this small area of Bilbao but we’ve handpicked our top things to see.

Any visit to the Old Quarter of Bilbao should start at the Arenal Gardens. The gardens are the gateway to the Historical Quarter and connect the Old with New Town.

It’s a small area of peace and tranquillity, where the trees provide a bit of shade and a break from the city.

There are two notable buildings that surround the gardens. The Arriaga Theatre, sitting on the river banks, is a beautiful building with a Neo-Baroque façade which was modelled on the Paris Opera House.

Whilst on the other side of the gardens, the Church of San Nicolás. The church has a striking Baroque façade with two towers that have overlooked the gardens here since 1756.

The Plaza Nueva (New Square) is at the heart of activity in the Casco Viejo in Bilbao.

Despite dating back to 1892, it’s named the “new” square after the Old Square (Plaza Vieja) was rebuilt on.

With a number of pintxo bars, traditional tavernas and restaurants lining the perimeter of the square, it’s the perfect place for an aperitivo (aperitif).

On a weekend, the square and its beautiful arches are always busy with a good atmosphere. On a Sunday, it’s home to the Sunday Markets where local traders sell all sorts of interesting goods.

It has also played an important part in Basque Culture, with the headquarters of Euskaltzaindia, which is the Royal Academy of Euskera (The Basque Language) based in the square.

The Casco Viejo goes by the same of “Zazpikaleak” (Seven Streets) in Basque.

This is due to the dark atmospheric seven streets that date back to the 1400’s when the Old Quarter was first developed. The seven streets are:

On the site where the gate was located in the wall that previously enclosed the Old Quarter is the Portal de Zamudio.

4. Eat until your heart’s content at the Ribera Market

The Mercado de la Ribera, or “Ribera Market” is not only the largest covered market in Europe, but it also entered the Guinness Book of Records recognised as the most comprehensive food market in the world!

If that isn’t enough to convince you to visit the market, then I’m not sure what will.

Maybe the fact that 60 or so local merchants have traded here everyday since 1929 will reassure you? Either way, the Ribera Market is one of the best places to try some of the local cuisine whilst in the Basque Country.

Aside from the delicious food, the building itself is curious enough to make the trip alone. Set on the River banks, it’s shaped almost like a ship docked at port.

The Santiago Cathedral in the Casco Viejo of Bilbao dates back to the 14th and 15th century.

It’s one of the oldest buildings in the Old Quarter, outdating most things that surround it. Although for most of its history it was a church, having only been declared a cathedral in 1950.

The cathedral is predominantly Gothic in style, but its tower and façade are neo-Gothic. The mixture of styles comes from the fact that the cathedral has had to be renovated on several occasions due to floods from the nearby Nervión river​​.

Given that the Casco Viejo was originally founded as the commercial centre of Bilbao, it’s only right that we recommend a bit of shopping here.

These days, whilst it’s less of a market for local produce and fresh fish (you have the Ribera Market for that!), it’s still an area with traditional shops and charming boutiques where you can find special local items.

There’s all sorts on offer, from wine shops, to delicatessens, clothing shops, down to handmade souvenir shops.

The shops here are usually independent and the owners take a lot of pride in their stock.

Some establishments have been there for a hundred years or more, having passed down generations. And don’t be afraid to ask, they’re usually more than happy to guide you to help find exactly what you’re looking for!