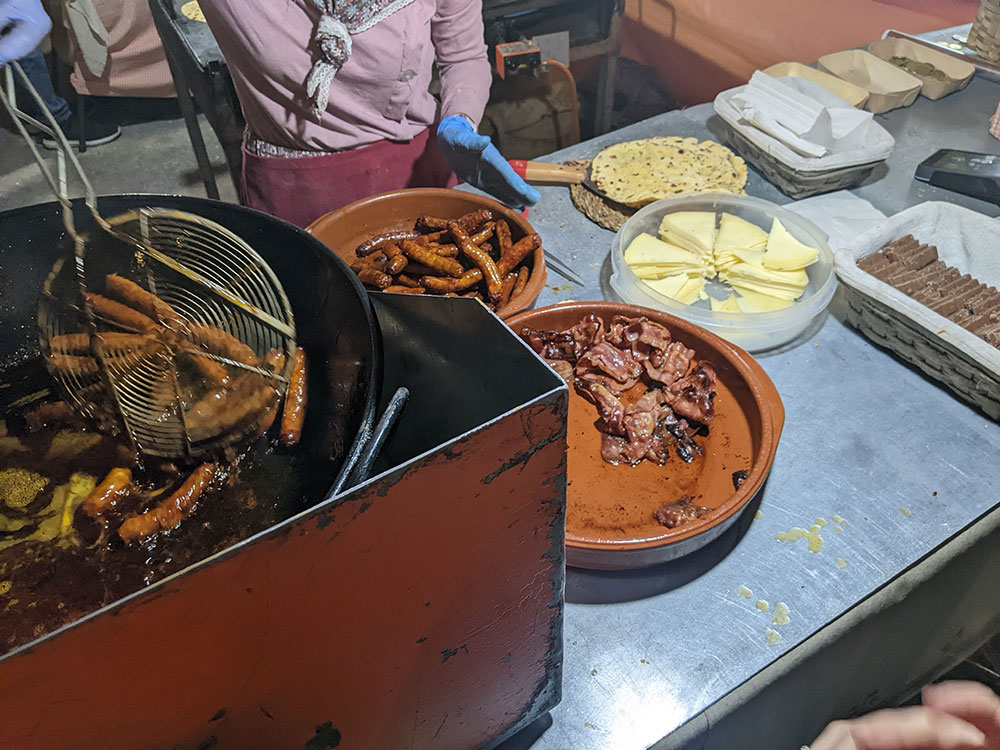 Chistorra or Txistorra in Basque (pronounced chees-toh-rrah in both cases), is a cured sausage originating from Aragon, Navara and the Basque Country.

The minced pork meat is seasoned with salt, garlic and paprika which gives it a recognisable dark red colour before and after cooking.

It’s a popular snack in the North of Spain, usually served as a pintxo or on a bocadillo (baguette sandwich). You’re likely to find Chistorra in any pintxo bar in San Sebastian served with a slice of bread underneath.

Each year on the 21st December, the Basque people celebrate the start of the Christmas period. In the case of San Sebastian, christorra stalls pop up across the city on this day, and people gather with friends and family to eat christorra and have a drink in the streets.

What is the difference between chistorra and chorizo?

Chistorra actually belongs to the chorizo family. On first glance, they do look similar, although chistorra is usually longer and thinner than chorizo.

They essentially have the same ingredients too; semi-cured or cooked pork meat, seasoning and spices.

However the main difference comes from the curing process.

Chorizo is cured, being slow cooked and air dried over a longer period of time, meaning it can be eaten uncooked,

Chistorra on the other hand is only semi-cured, usually only being smoked for a couple of days. This means it has to be cooked before eating (mainly pan-fried).

As a result, chorizo is a much drier meat than chistorra. Much of that comes down to the fat content which is also much higher in the latter.

The Basque aren’t known for their spicy foods.

And Chistorra, having originated from the North of Spain, is no different. Whilst it contains paprika, this tends to be of the sweeter, milder notes.

How do you eat chistorra?

The most common way to eat chistorra is as a pintxo in a bar. The chistorra is pan-fried and chopped into smaller portions, usually being served with a slice of bread.

In restaurants, chistorra may be served as a ración (sharing ration), where the chistorra is cut into small pieces, served on its own.

A chistorra bocadillo (sandwich) is also fairly common, but eating a lot of chistorra at once can become quite heavy due to the high fat percentage.

On the 21st December (Santo Tomas), some of the stalls that appear across San Sebastian sell chistorra with talo – a Basque corn tortilla, made from corn flour, water and salt. This is somewhere in between a pintxo and bocadillo, more of a wrap.